The Flight of the Wren by Orla McAlinden- 2018 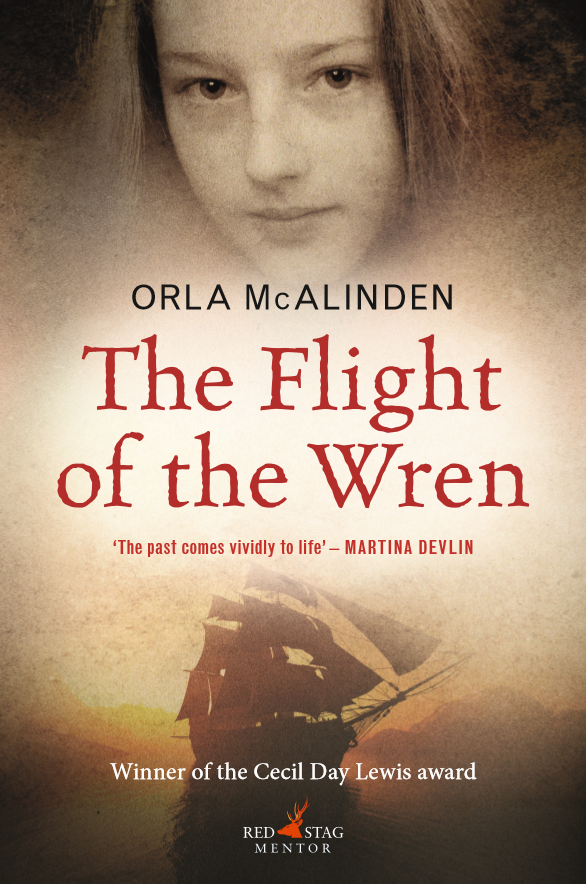 Mentor Books - Publisher of the Flight of The Wren

The Irish Times on The Flight of the Wren

Death estimated at one million

As many as two million left the country, for America, Canada, New Zealand and Australia

The immediate cause was a crop disease that destroyed

potatoes, the primary food of the Irish.  It was made much worse by the actions of the English.  Properly governed, this need never have happened.  Wherever the English ruled, famine followed.

No other, of the several works of fiction and nonfiction I

have read on the Irish Famine Years (1845 to 1849) comes as close to capturing the lived experience of the Irish people than Orla McAliden’s darkly beautiful debut novel, The Flight of the Wren.  The Wren were a group of several hundred Irish women driven by social devastation of the
famine to survive by prostituting themselves to the British soldiers stationed in Kildaire.

The novel is structured in a very interesting fashion.  It begins in 1919 in Hobart, Australia, on the island of Tasmania, once known as Van Dieman’s Land. Saoirse, young woman is at the bedside of her dying grandmother.  They are at a prosperous inn owned by her grandmother
which will become hers one day.  She knows that what she has been told about her family history back in Ireland is not the truth.  Before her grandmother passes, she wants to know her real family history.  She fears everything upon which she has based her identity is a lie, a dark coverup.

Switching between Ireland and Australia and between 1848 and 1919, we vivaciously experience the horror of the

famine through the experiences of fourteen year old Sally MaHon.  Sally’s parents have just died from what is called “road fever”.  She has no one to turn to for help.  She sleeps for a few days on her parents grave until she takes to the road to Kildare where she thinks she can find work at the large British Army garrison.  She meets a very decent man who gives her a ride, some food, some advise and asks nothing in return.  It felt good to see the decency of the
Irish has not been totally destroyed.  When Sally reaches Kildare she meets a Nellie twenty
six, a Wren, a woman living by sexually servicing the British soldiers.  We witness horrifying scenes of starvation and degredation.  Nellie comes up with a plot.  Sally and her will commit arson in the hopes they will be transported to Australia.  After a few years a woman is given her freedom.  Women are in short supply.  Nellie’s plan is to keep control of Sally in Australia, keep her a virgin and find her a rich
husband.  Nellie will pose as her older sister and plans to live with Sally and her husband.

McAliden vividly shows us the horror of prison life.  It was so scary when Sally goes in front of the judge.  The longest part of the novel is devoted to the three month long boat trip from Ireland to Australia.  There are lots of marvelous detail that brings the seemingly endless voyage to reality.  Everything revolves around food.

I don’t want to tell more of the plot.  Lots of great things happen and of course there is horror. I loved The Flight of the Wren.  The characters are perfect, the desperate hunger speaks of deep cultural pain, the scenes in Australia, where Sally lived on for many years, tell us just enough to let us construct somethings for ourselves.  We see how the famine brings out the worst and the best in people.

The Flight of the Wren is a brilliant work of historical fiction.

I give it my endorsement to all, especially those interested in Irish history or the early years of British Australia. It would make a wonderful movie.

As a nonfiction companion work I highly recommend The Fatal Shore: The Epic of Australia's Founding by Robert Hughes.  He goes into a lot of detail on Tasmania.

In terms of fiction, I suggest The Secret River Trilogy by Kate Grenville, set in Australia starting one hundred years prior to The Famine years.

These four books and The Flight of The Wren would make a great early Australia Reading Binge.

For background on why famines occured whereever the British ruled, you should read Late Victorian Holocausts by Mike Davis.

The Flight of the Wren, Published 2018 winner of the CD Lewis award and the Greenbean Novel Fair. Available at www.kennys.ie

I look Forward to following Orla McAliden’s work for years to come.

Mel, this sounds like a very touching book, historical fiction at its best. Excellent review! I will keep this book in mind.

Both Ireland and Australia: covering two of your particular interests! No wonder you enjoyed this so much. I've added it to my TBR as well. And her collection of stories, The Accidental Wife, which you've noted above too; they're linked stories - even better!