"The Mats" by Francisco Arcellana

Nothing Can Destroy the Faith and Strength of the people of the Philippines -  Mel u, Quezon City and Candelaria, November 10, 2013-  comments welcome 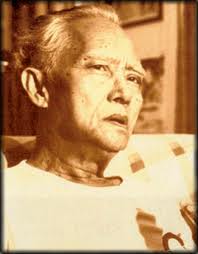 Arcellana was a highly regarded poet, essayist, critic, journalist and teacher.  It is for his short stories that he is best remembered.  He is considered one of the first writers of the modern Filipino short story in English.    It is his lyrical style that became the role model for a generation of writers.   He was proclaimed a national artist of the Philippines in 1990 and was given a state funeral.

"The Mats" is set somewhere before World War II.  It was in the time when people did not sleep in beds but slept on mats.   As the story opens Mr Angeles, head of a large family, has just returned from one of his periodic inspection tours on the families farm lands in the Marivales in the province of Bataan.   Students of WWII history will know of the Bataan Death March and it is in fact very close to my families home province in Zambales.   The population now is about 125,000 people but I would be surprised if there were more than a few thousand at the time of the story.

Mr. Angeles return is always very exciting for his children as he always brings them a nice gift in addition to the huge amount of fruit he brings home.  (I really enjoyed Arcellana's listing of all the fruits.)   He has a special surprise this time.  While he was gone he had met a marvelous artist who specializes in making sleeping mats.   His wife still treasures the sleeping mat she got as a wedding present.  Whenever anyone in the family is sick they sleep on the mat.   Everyone gathers around for the mats to be given out, he has them all rolled together.  The mats are great works of art, each one has the name of the child it belongs to woven into it along with a special symbol that relates to their life.   They are all totally thrilled.  Then the father tells them that they are to not use these mats until they have reached a milestone in their lives such as enrollment in  the University of the Philippines.  This seems a little cruel but maybe it was motivational.  I am not quite sure how this should be taken.  Then they notice they notice there are three more mats rolled up.   Those are for their children that have passed away.   This somehow brings a chill on the occasion, or at least it did to me.   It almost seemed a burden a father should share on his own but it can also be taken as total family bonding even with members that have passed and placing a spirit of history in the children.

The prose style is simple and beautiful.   From "The Mats" we can get a good look at the lives of people from the 1930s or so in the Philippines.  (Note-I am not sure of the exact date of this story, I am guessing at the date based on what I know and ask anyone who knows its publication history to share their knowledge with us.)

I urge anyone who wants to learn more about the regional literature of the Philippines to follow the blog of Nancy C, A Simple Clockwork.   Nancy will soon post on another one of Arecellana's short stories.

This is not a closed project, anyone who wants to write a post on a short story of the Philippines is invited to join us.

"The Mat" (and several other short stories) can be read HERE.

It was published in Philippine Magazine in 1938. I'm reading an anthology of Filipino short stories where this is included in Filipino translation.

Rise. Thanks very much. I will ammend my post and give you credit

Thanks for the introduction & I will be interested in finding out about the poetry. Do you have any knowledge of where I may find some.
Thanks again.

Children's expectations have certainly changed in terms of gifts. Interesting to see the high expectations of the father for his living children

Parrish Lantern. I hope you enjoy his poetry

Valerie Sirr. For sure!