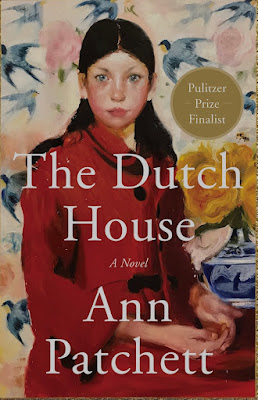 This is my first venture into the work of Ann Patchett.  The Dutch House, built in 1922 just outside Philadelphia, by a couple that got rich selling cigarettes. In 1946 a real estate mogul bought the House and the full contents at a bank sale.  It was meant to be a surprise for his wife. She hates the House and everything it stands for so much she deserts the Family, supposedly to go to India to help the poor..  Their children Maeve ten and Danny three beoome very close.The children begin to

“Suffer as if they had all become characters in the worst part of a fairy tale”.

Andrea, 18 years younger than the father, falls in love with the house but not her stepchildren.   She is a widow with two children. As expected in a few years when their father dies, he left almost everything to her, she kicks them out of The House. Danny narrates the story.

There are lots of twists and turns. Danny goes to medical School but never practices.  Following his father he begins to buy properties at foreclosure sales,Marries, has kids, becomes rich, divorced and more.Maeve does the books for his business and a big fruit and vegtable company. She never Marries or has any relationships.

Lots of quite surprising things happened.

I enjoyed this novel a lot.

“ANN PATCHETT is the author of seven novels, The Patron Saint of Liars, Taft, The Magician’s Assistant, Bel Canto, Run, State of Wonder, and Commonwealth. She was the editor of Best American Short Stories, 2006, and has written three books of nonfiction–Truth & Beauty, about her friendship with the writer Lucy Grealy, What Now? an expansion of her graduation address at Sarah Lawrence College, and This is the Story of a Happy Marriage, a collection of essays examining the theme of commitment. In 2019, she published her first children’s book, Lambslide, illustrated by Robin Preiss Glasser.

A graduate of Sarah Lawrence College and the Iowa Writer’s Workshop, Patchett has been the recipient of numerous awards and fellowships, including England’s Orange Prize, the PEN/Faulkner Award, the Harold D. Vursell Memorial Award from the American Academy of Arts and Letters, the Book Sense Book of the Year, a Guggenheim Fellowship, The Chicago Tribune’s Heartland Prize, The Governor’s Award for Excellence in the Arts, the American Bookseller’s Association’s Most Engaging Author Award, and the Women’s National Book Association’s Award. Her books have been both New York Times Notable Books and New York Times bestsellers. Her work has been translated into more than thirty languages.

In November, 2011, she opened Parnassus Books in Nashville, Tennessee, with her business partner Karen Hayes.  She has since become a spokesperson for independent booksellers, championing books and bookstores on NPR,

Ann Patchett lives in Nashville with her husband, Karl VanDevender, and their dog, Sparky.”  From http://www.annpatchett.com/

I look for war to reading more of her work.