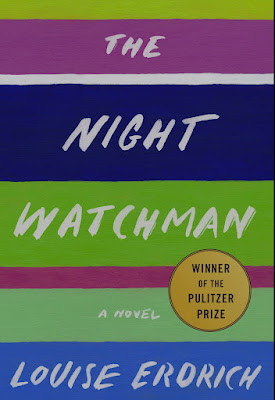 Buried in Print on Louise Erdrich

Best Bio of Author I could find. On The Poetry Foundation

Back in July of 2014 I read “Nero” by Louise Erdrich.  It won the O. Henry Award for best short story that year.  Seven years it took me to read another of her works, The  Night Watchman, the 2021 Pulitzer Prize Winner for Fiction.

It is gratifying to start September with such a powerful novel.

The Night Watchman is based on the author’s grandfather who worked as a night watchman while working to prevent Native Americans Chippewas from being dispossed from land they long lived on.  The Bureau of Indian Affairs, a Federal agency, was in charge of whether or not a linked group of Native Americans should be designated a tribe.  Losing that designation meant loss of reservations rights and government help.

It is 1953, powerful men  in the American Congress want abolished the  treaty given rights of the Chippewas and other groups, a potential disaster.

The novel focuses on Pixie Paranteau, a high School Valedictorian, granddaughter of Thomas, thd night watchman.  Most of her female fellow graduates quickly marry and have children. Pixie, she prefers to be called Patrice, does not want to be tied down.  She has a job at a bearing plant.  She supports her mother and younger brother.  Her alcoholic  father periodically returns home to terrorize his wife and try to bully Patrice out of money.

There is a large cast of characters.  Vera, Patrice’s sister, moved to Minneapolis several months ago and has not been heard from in a long time.  Minneapolis is pictured as a potentially dangerous big city.  Vera takes a week leave to look for her.  She gets involved in a strange job playing an ox in a bar where she is exploited and at risk for being forced into prostitution.

Thomas and Patrice live in this impoverished reservation community along with young Chippewa boxer Wood Mountain and his mother Juggie Blue, her niece and Patrice’s best friend Valentine, and Stack Barnes, the white high school math teacher and boxing coach who is hopelessly in love with Patrice.

Watching Thomas testify in Congress was a wonderfully rendered very important part of the novel.

“In the Night Watchman, Louise Erdrich creates a fictional world populated with memorable characters who are forced to grapple with the worst and best impulses of human nature. Illuminating the loves and lives, the desires and ambitions of these characters with compassion, wit, and intelligence, The Night Watchman is a majestic work of fiction from this revered cultural treasure”. From Harper and Row

I am so glad I read The Night Watchman.