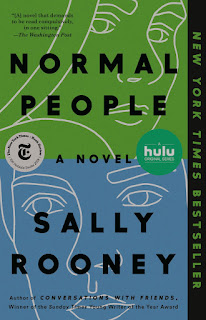 From The Irish Times - A Very interesting interview with background information

Normal People takes us deeply into the relationship of Connell and Marianne.  Set in Dublin from 2011 to 2015, they both attend a secondary school in County Sligo before going to Trinity College in Dublin, an elite institution.

Connell is handsome, popular and very intelligent.  Marianne is not at all popular, considered by most other students as not quite normal.  She is also quite intelligent. To complicate matters, in very class conscious Dublin Connell’s mother works two days a week as a cleaner for Marianne’s wealthy mother.

At first Connell keeps their affair a secret out of concern his friends will mock him.  Both are at the age where the opinions of their peer group are very important to them.  Much of the novel is taking up with details of their sex life.  Marianne is very possessive as well as insecure, demanding to know about other women he may have slept with.

and attractive while Connell struggles to fit in with his peers, most from richer families who talk a lot about how rich their fathers are.  Connell’s father deserted his mother when he was an infant.  She refuses to talk about this with Connell.

Marianne’s father died a few years before their relationship began.

Their relationship becomes a  struggles as each have other partners.  It develops Marianne is very masochistic, she wants to be hurt during sex.  Connell will not do this.

As they work to understand themselves, to judge their lives against “normal people” their relationship continues even as they have new partners.

I found myself very interested in Marianne and Connell. There are numerous surprising developments.

As I read this I was reminded of Declan Kiberd’s essential book Inventing Ireland: The Literature of the Modern Nation in which he asserts and documents the assertion that the dominant theme of modern Irish literature is that of the weak or missing Irish father.  For sure I see this in Normal People.

Her third novel is just out Beautiful World, Where Are You? was published today.  I for sure hope to read it soon. It is already a best seller on Amazon.