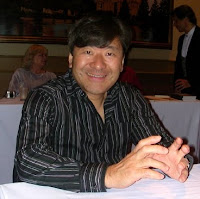 Ring by Koji Suzuki
Ring  by Koji Suzuki (1991, translated from Japanese by Robert Rohmer and Glynne Walley, 2003)
is the second Japanese horror novel  that I have read for the Japanese Literature Challenge 3.

The book jacket says Suzuki has often been called the Stephen King of Japan.   His novels have been made into popular movies.  The main character of the novel, Asakawa, is a journalist who has written a good bit about occult phenomena in contemporary Japan.     Something happens that puzzles and intrigues him.   His niece, in her early 20s and in perfect health suddenly dies for no reason the doctors can fine.   Three other young adults die in a similar way in rapid sequence.   He begins to search for a common theme in these deaths.  He finds that a week before their death they all had spent the night in the same motel.   Two of them together but two of them alone.  He decides to go to the motel and spend the night there.

Of course any fan of horror movies and novels knows a visit to a strange motel can have sinister consequences.   Things begin to get develop in a macabre direction.  When he arrives at the motel the manager is an odd seeming old man who seems to spend all his time watching videos.   Asakawa decides to rent a video to help him pass  the time in this isolated motel.   The tape turns out to be a set of seemingly unrelated images many of which are evocative of death.     A very sinister message comes right at the end of the tape.    He is told he will die in exactly a week.   He figures out the four young adults who died  had all seen the same video and all died a week after they stayed in the motel.    Asakawa tries to tell himself  that this is just a coincidence but he is scared, very scared.    His rational mind tells him that watching a video cannot cause his death but he cannot really make himself feel safe.    He tells one of his friends about the experience.   The friend at once asks to see the tape.    Now the story gets a bit complicated.   We learn the main persona in the video is linked to the last woman ever to time in Japan of smallpox.   Asakawa is horrified to learn his wife and children have seen the video also, he left it out.  We meet a researcher of psychics, a once well respected academic now fallen into the shadows.    We enter a world of charlatans and those in fact in touch with another realm.   (Some times in "real life" we find the same person to be both)   It turns out the former professor was married to the woman in the video.   Asakawa begins to research her past and the past of the old motel.   It turns out, of course, some very evil things are linked to the woman and the location of the motel.    It is suggested that the small pox virus maybe fighting back from near extinction.    A lot of the fun of the book is, of course, in the plot so I will not say anymore.

To me Ring only partially succeeds in creating an atmosphere of terror.   You can see the story line makes use of standard cliches.   Of the two Japanese horror novels I have read, I  liked The Crimson Labyrinth
best.    I bought this book at the recent Manila Book Fair for about $4.00 USA.   I basically bought all the Japanese novels I could find at the show.    Some Amazon reviewers have given this book five stars.   I guess I would give it three.   Some also give it one star and say it does not scare them and the characters are not interesting.    I would say if you have a lot of reading time and are interested in reading some Japanese horror novels you might as well read this book.   In spite of some reservations I am glad I read Ring.

This is my forth book for the R I P IV Challenge and completes my participation in this challenge.   The Challenge is a great one and I thank Carl for hosting it and hope to be back next year.

I will also be participating in the Japanese related reading activities on In The Spring it is the Dawn.
Rain by coincidence completes that blogs mini-challenge for October-to read a scary Japanese book or watch a movie.

My daughter was digging through her old books and she ran across this one. We have no idea where it came from, do not recognize it at all. I am curious about it. Nice review.

Very interesting review! I had no idea that Japan has a "Stephen King" of its own. This was a good way to read something for the JLC-3 and the R.I.P. IV.. (I'm planning on reading another Yoshimoto book soon, Lizard, for the JLC-3 , and have started a book for R.I.P..

Suko-I will look forward to your review of Lizard, which I have not yet read. I bought her book Hardboiled recently and should read it before year end, I hope.

Mel..thanks for stopping by and considering my 2010 challenge.

Diane-my pleasure and thanks for visiting here also-I need to get my list worked out-So far I will include The Red and the Black, Portrait of a Lady, and Magic Mountain-will post my lost soon

Hi, Mel! I'm not comfortable comparing Koji Suzuki with Stephen King. Whoever mentioned that Suzuki is Japan's version of King probably is referring to the fact that Suzuki is Japan's biggest horror novelist (the same way that King is America's most successful horror writer). But I think Suzuki's style of horror is subtler and more effective than King. But I still love King though, especially his earlier works (The Stand, Salem's Lot, The Shining).

Peter The reference to Stephen King is on the book jacket and in some of the Amazon.com reviews by readers as well as published reviews. They did probably mean it in a commercial rather than artistic sense. The book jacket was designed for an English speaking audience so they needed something that would catch eyes. I confess I have yet to read a Stephen King novel.

Thanks for joining in this first month of Hello Japan! I'm not really into horror, per se, so I haven't read or watched Ring. It's so well known though I feel like I should someday.. maybe...

Hi Mel, we were sort of buddy-ing in this mini-challenge! I decided to watch the movie Dark Water, by Hideo Nakata -- because I found his Ringu quite good! Scary... I think the atmosphere was well done in the movie!

If I liked Dark Water as much..? You can read that in my Hello Japan #1 post, which will be up in half an hour ;)

I agree with Peter ... Suzuki and King have different style...I enjoy both :) too bad Ring is the only book I have read from Suzuki.

I am still looking for his other books...it's quite hard to find in here.

Nice review :) I made my review before joining Jap-lit challenge.

Although I wouldn't describe it in terms of horror, but I enjoyed it enough that I also read spiral & loop, so although it didn't at all frighten me in any form it was entertaining.