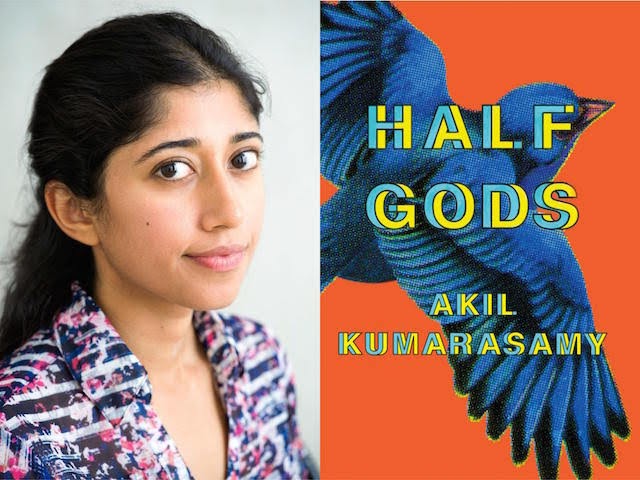 You can read “The Office of Missing Persons” here


Gateway to works by Amanthi Harris focusing on Sri Lanka

I first became aware of the near overwhelming stories of Akil Kumarasamy in a news letter from PEN.  It was announced that she, along with four other writers, was shorted  listed for their annual award for Best Debut Short Story Collection. On her website I learned of numerous awards and looked through the glowing reviews.  I am very interested in fiction dealing with the interface between south  Asian culture and that of the Anglophone west.  I knew I wanted to learn more about her work.  (I have posted on works related to the civil war and social unrest in Sri Lanka before, occasioned by a reading of short stories by Amanthi Harris.)

“The Office of Missing Persons” shows us what happens when the seventeen year old son of one of Sri Lanka’s leading entomologists goes missing.  The man’s discoveries of new insect species has raised the prestige of Sri Lanka in entomological circles to such a degree that he is sometimes referred to as “The President’s insect man”.

Kumarasamy does a wonderful life in her vividly cinematic presentation of the man’s visit to the office of missing persons.  The officer in charge at first tries to suggest the boy may have just run off on a lark:

“Jeganathan paused. “He did not return home after his studies.”
“These young Tamil boys always getting into trouble. They don’t know how to be proper citizens,” the officer said and scratched something on the paper in blue ink. Jeganathan remembered his younger boy, Prem, shaking on the floor as they questioned him, his eyes flushed with tears as he cut through the bond of the womb and revealed the trip Jeevan had planned that night with Amutha to the local Shiva shrine, and before then all their meetings under the neem trees by the abandoned pharmacy, the way his brother unraveled her braid, tied her hair around his hand like a bandage.

His wife has often urged him to leave Sri Lanka, taking a teaching job outside the country.  Things begin to turn badly for Jeganthan.  People assume his son was “disappeared” for unacceptable to the anti-Tamil forces political actions or speech.  People begin to shun him and his wife.  Their household helper quits.  He eventually loses his university position.  I will leave the rest of the story untold.

I do what to share enough of her beautiful prose to let you see why this story is so marvelous.

“Jeganathan worked as an entomologist. He was not prone to chatting except in the lecture halls in front of his students, talking of what he loved best. He was fastidious with what he could control, his ironed suits and finely trimmed mustache, the way he recorded his work in his notebook, the column for wingspan blank until he measured the specimen three times.
He had never been militant. He joked about dueling other entomologists like William de Alwis, the Sri Lankan butterfly man, because they seemed harmless. In keeping company with insects, he had avoided addressing the war altogether, though his wife disagreed on that matter. In her eyes, he was a man so dedicated to his work that he was willing to get both his legs blown off for some dung-eating insects.
“Weren’t you almost killed by a mob in Colombo? And look, we’re still here in this country,” his wife said after hearing of his job transfer from the capital to up north. “I thought by marrying a professor we’d end up in Toronto, Sydney, London, anywhere better, and now you want to take me to Jaffna. Do you want to get us deeper into this war?”
Jeganathan had decided to transfer to Jaffna not because of politics but because of a discovery. While praying in the Murugan temple in Nallur, he saw a blue beetle skitter across the floor. The strange wings and streaks along its abdomen forced him to his knees, and he crawled after the specimen. He carried the beetle in a jar all the way back to his office in the capital. After his examinations, he suspected he had discovered a new species. He named the insect—Nicrophorus m. kumaratunga—after the president at the time, and when questioned by officials what the m stood for, he said, Madame, not the Hindu deity Lord Muruga. While officials hassled other Tamil intellectuals at the university, they did not bother with him, the professor whose blue-winged insect talisman granted him a level of immunity.”

The characters are all rendered with great verisimilitude, you can almost feel the shimmering heat of a tropical mega-City.

A startlingly beautiful debut, Half Gods brings together the exiled, the disappeared, the seekers. Following the fractured origins and destines of two brothers named after demigods from the ancient epic the Mahabharata, we meet a family struggling with the reverberations of the past in their lives. These ten interlinked stories redraw the map of our world in surprising ways: following an act of violence, a baby girl is renamed after a Hindu goddess but raised as a Muslim; a lonely butcher from Angola finds solace in a family of refugees in New Jersey; a gentle entomologist, in Sri Lanka, discovers unexpected reserves of courage while searching for his missing son.
By turns heartbreaking and fiercely inventive, Half Gods reveals with sharp clarity the ways that parents, children, and friends act as unknowing mirrors to each other, revealing in their all-too human weaknesses, hopes, and sorrows a connection to the divine.

Akil Kumarasamy is the author of the book Half Gods (Farrar Straus & Giroux, forthcoming). Her short fiction has appeared or is forthcoming in American Short Fiction, Glimmer Train, Guernica, Harper’s Magazine, and the Massachusetts Review, among others. She has taught at Rutgers University, the University of Michigan, and San Diego Writers’ Ink. She holds a BA from Barnard College and an MFA in Fiction from the University of Michigan.

I greatly look forward to reading the full collection and following the work of Akil Kumarasamy for a long time.  We know all his life Jeganathan, his wife and younger son will wish they had long ago left Sri Lanka.

Years ago when I first began posting on short story collections I followed standard procedures, post briefly on a few of the stories then conclude with metaphor laden concluding remarks and issue a recommendation.  Sometime ago I moved toward focusing on individual stories.  If I like a writer as much as I do Chaya Bhuvaneswar I post on numerours of the stories.  This seems more respectful of the writer, better for serious readers and for me also.  Writing about a work seems to increase my understanding and helps me recall the story.