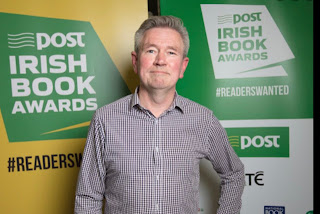 You may read today’s story here.

Gateway To Brian Kirk on The Reading Life.  Be sure To read his very insightful Q and A Session.

In March 2013 for Irish Short Story Month Three I posted on a very well done story by Brian Kirk, “The Shawl”, my first encounter with his work,  that goes deeply into how money can govern  a romantic relationship.

“The Shawl" by Brian Kirk has a great deal to tell us about how money permeates our relationships and can be too important in determining self esteem if we have no  anchor in life. It is a story to which  anyone who was once riding high on what they thought was an endless wave of prosperity can directly relate.   Women may wonder what they would do if the same thing happened in their relationship and men will wonder what their partner might do.

Some time ago I read in a Japanese novel (I cannot recall the name of it) showing that when a man loses his money, often his relationship with the woman in his life takes a down turn or ends.   The man will quickly think, "OK I am broke so she left me".   In fact it is often the man does not have the strength or the inner resources to live with out his money propping up his ego and he behaves in a way calculated to drive the woman away so he can then tell himself that this shows she never loved him.  Of course then the woman who leaves will also wonder about her own values

It is wonderful stories like this that have kept me following Kirk’s work for seven years.

“I Love You Now Leave Me Alone” is told by a widow with grown children.  I thought the depiction of the relationships was wonderfully realized.  You see how time has changed things as the mother tries to develop here own life, no longer living really near her children.  Her children are trying to do their duty.

“One of them always calls when I’m busy. Either I’m in the bath or sitting down to a supper of smoked mackerel and brown bread when the phone bursts into life. From the moment I answer I can tell that they want to ring off. I often consider telling them it’s okay – I’m okay – that I feel the same, but I never do. They would be horrified, as much by my lack of maternal feeling as by the knowledge that I fully understand their haste to end the conversation.
‘How are you, Mom?’ they ask.
‘Fine. I’m fine,’ I say.
‘Are you sure?’
‘Yes, I’m sure.’
‘I just worry about you, that’s all. Off on your own, miles away from everyone you know.’
‘I like being on my own.’
Silence.
‘And anyway, I’m not always on my own; I have friends here too.’
‘But it’s not the same since you moved.’
‘Of course, it’s the same. I’m just further away.’
But I don’t mind the phone calls too much – they never last long. And I always make it easy for them to extricate themselves: I have something in the oven, there’s someone at the door, my show is starting on TV. To be honest, I don’t watch much TV at all. Once – just for mischief – I kept my son, Jamie, on the phone when I knew he was in a hurry to be somewhere else.
‘I suppose I should go, let you get on with things…’ he said.”

The mother senses sometimes they are in a hurry on the phone.  There is a lot of emotional chain pulling in most relationships of mothers to their adult children and Kirk depicts this perfectly.

We learn about the lives of the children.  The daughter is in a same-sex relationship which the mother totally accepts.  Her son is married with children.

The children and widows both have a hard time of it when the mother begins to date a man her age.  She doesn’t really know much about dating anymore.  She seeks but is trepidatious about intimate contact.

“I Love You Now Leave Me Alone” will delight all lovers of relationship centered source stories.  Those of us who have been in the situation of either the mother or the children will for sure be drawn to reflect on their experiences.

I hope to follow Brian Kirk’s  work for a long time.

Brian Kirk is a poet and short story writer from Dublin. His first poetry collection After The Fall was published by Salmon Poetry in 2017. His poem “Birthday” won the Listowel Writers’ Week Irish Poem of the Year at the An Post Irish Book Awards 2018. His short fiction chapbook It’s Not Me, It’s You won the inaugural Southword Fiction Chapbook competition and was published by Southword Editions in 2019. His novel for children The Rising Son was published in 2015 He blogs at www.briankirkwriter.com.