A Month In The Country-A Drama by Ivan Turgenav(1850) Translated by Constance Garnett, 1899 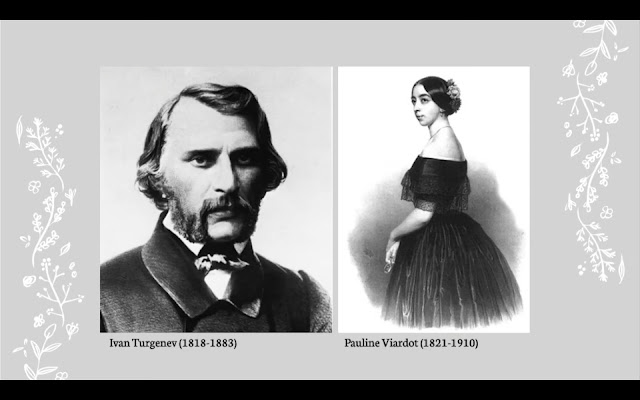 Last month I read a marvellous book The Anna Karenina Fix -Life Lessons From Russian Literature by Viv Groskup. In a chapter on Ivan Turgenav she focuses on his drama A Month In The Country. I have read a bit of his work but never a play. So inspired by Groskup I have read now this play, in translation by Constance Garnett.
"This is where Turgenev comes in. No one writes better about unrequited love. Real life is about quiet, slow, awkward moments of humiliation. And what greater humiliation is there than loving someone far, far more than they love you?" Viv Groskup
A Month In The Country,set in a rural dacha, is a story about ill-advised unrequited love,lives ruined with no hope but to try to move on emotionally.
.
Turgenev was for fourty years madly in love with a married French opera singer, Pauline Viaradot. Groskup talks a lot about this. For sure he loved her much much more than
The cast
Natalya Petrovna, wife of a rich landowner, 29
Mikhail Aleksandrovich Rakitin, a family friend, in love with Natalya, 30
Aleksei Nikolayevich Belyaev, a new young tutor of Natalya's son Kolya, 21
Arkadi Sergeyevich Islayev, a rich landowner, husband of Natalya, 36
Kolya, son of Natalya and Islayev, 10
Vera Aleksandrovna (Verochka), Natalya's ward, 17
Anna Semyonovna Islayeva, Arkadi's mother, 58
Lizaveta Bogdanovna, a companion, 37
Adam Ivanovich Schaaf, a German tutor, 45
Afanasi Ivanovich Bolshintsov, a neighbour, 48
Ignati Ilyich Shpigelsky, a doctor, 40
Matvei, a servant, 40
Katya, a servant, 20
Natalya Petrovna, a 29 year-old, is married to Arkadi Islaev, a rich landowner seven years her senior.She is Bored with life and welcomes the attentions of Mikhail Rakitin as her devoted but frustrated admirer, without ever letting their friendship develop into a love affair.
The arrival of the handsome 21-year-old student Aleksei Belyaev as tutor to her son Kolya ends her boredom. Natalya falls in love with Aleksei, but so does her ward Vera, the Islaevs' 17-year-old foster daughter. To rid herself of her rival, Natalya proposes that Vera should marry a rich old neighbour, but the rivalry remains unresolved.
Rakitin struggles with his love for Natalya, and she wrestles with hers for Aleksei, while Vera and Aleksei draw closer. Misunderstandings arise, and when Arkadi begins to have his suspicions, both Rakitin and Aleksei are obliged to leave. As other members of the household drift off to their own worlds, Natalya's life returns to a state of boredom.
Groskup sees as the life lesson of A Month In The Country to be careful not to fall in love with someone who will never love you back. Sometimes male characters talking to each other see love as a curse.

Good, isn't it? Prot-Chekhov. A little heavy compared to the light-footed CHekhov.

Another great play contemporary with the Turgenev is Ostrovsky's "The Storm," which has some unusual features.