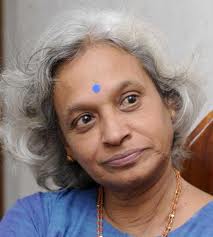 C. S. Lakshmi (writing sometimes under the name of Ambai) was born in 1944 in the Indian state of Tamil Nadu.  She received her Ph.D from Jawaharlal Nehru University, writing her dissertation on American policy on Hungarian refugees.    She was a university lecturer and is considered one of the primary spokesmen for the rights of women, writing in Tamil..   She has published a large body of academic work as well as fiction, written in Tamil under the pen name Ambai.   She has been a fellow at the University of Chicago and done work on the social history of women in Tamil Nadu.   She currently directs the Sound and Picture Archives for Research on Women in Mumbai.    Her first collection of short stories was published in 1976.    Her husband is the film maker Vishu Mathur and she has written scripts for his movies.

"Yellow Fish" (translated from Tamil by Lakshmi Holmstrom) is a simple, very moving story about fisherman and their wives and a woman whose baby died long ago.  Lakshmi does a very good job of letting us feel the heat of the tropical seashore.   The wives of the fisherman are all gathered at the shore as the boats are coming in and their help will be needed to get the nets in, the boats on shore, and the fish sorted out into those that can be sold or used and those with no value.   We see a great mixture of colors and sensations as the fish are sorted out.   The ones with no value are just thrown on the shore to die.  The woman sees a yellow fish in the sand, gasping for water.   It is told in the first person by the woman and she begins to see in the dying fish her daughter that died so many years ago, right after she was born.  The baby used to open and close her mouth just like she was trying to suck in air, the yellow fish forces these images back on her mind.   She dies and her ashes are placed in a small urn.   When her husband brings the urn home the woman demands that the lid be opened and she places the ashes of the baby in the sea from which the yellow fish came.  The yellow fish seems to struggle to get back to the sea.  The woman tells a fisher boy to throw the yellow fish back in the sea.   He laughs at the feeling he cannot understand.   The last lines of the story were very moving.  "You can see its clear yellow for a very long time   Then it merges into the blue-grey-white of the sea".

Ambai is a trailblazer in modern Tamil feminist writing. At the time she came in, it was mostly men who wrote about women and their feeling and very few women writers who also pretty toed the thinking of the patriarchal society. These women writers wrote about emancipation of women but within a small context ensuring that the existing order would not be disturbed. But Ambai trampled all these conventions and put forth a modern woman who dared to live by her terms, giving no quarter for existing societal mores. While majority of women writers before her worked within certain self-imposed limits, she broken them and created a new level ground for writing.

'Amma Oru Kolai Seidhal' (Mother committed a murder) is a story of hers that is oft quoted in all discussions about her writing. Do check out if this story and others too are available in English.

To digress a bit, from the 90's there has been a great increase in writing by women in Tamil, with several quality work (novels/short stories/poems) coming out. 'Story of Midnight Hours' is a novel written by Salma about the lives of Muslim women.

WordsBeyondBorders-thanks so much for sharing your knowledge with us. I greatly appreciate it.

Interesting post, Mel. Sounds like it's worth a read. Which of her collections is it in or would I find it online?