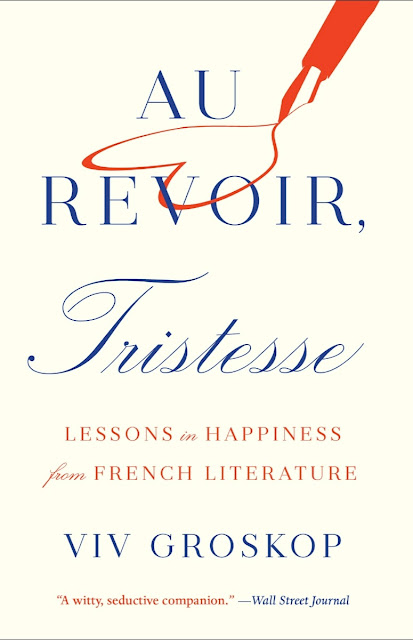 Last month I read a marvelous book Viv Groskop, The Anna Karenina Fix: Lessons in Happiness From Russian Literature.
I was delighted to find her book on French literature, Au Revoir, Tristesse: Lessons in Happiness from French Literature, for sale for $2.95.
The twelve works featured are
Bonjour Tristesse by Francois Sagan -1954
Remembrance of Things Past by Marcel Proust -1913 to 1917
Les Miserables by Victor Hugo -1862
The Lover (La Amant) by Marguerite Duras -1984-latest work featured
Madame Bovary by Gustave Flaubert - 1856
Cryano de Bergerac by Edmund Rostand -1897
Bel Ami by Guy de Maupassant -1885
The Red and The Black by Stendhal 1830
Cousin Bette by Honore de Balzac - 1846
The Stranger by Albert Camus 1942
Gigi by Colette - 1944
Dangerous Liaisons by Choderlos de Laclos.  1782  The only epistolary novel featured by Groskup.
At least five of these works are without a doubt among the best  100 novels, the works of Proust and Flaubert in the top ten.
Like her book on Russian authors, this book is a mixture of memoirs of her life from childhood to her forties,married with three children, capsuled biographies of the authors tying their work into the works she features and an her views on the Lessons concerning happinrss in them.
Groskup tells us that she picked for her work books she first encountered studying French at Cambridge. Books that she could relate to her own life.  Growing up in a small English town, she became infatuated with all things French. She formed the idea that the French were happier, sexier, better dressed,far better fed, and did not worry very much about what others think of them.  Groskup details her efforts to immerse her self in French while studying in Paris. She wanted a French boyfriend.
In each chapter she tells us what the Lessons about happiness the authors provided her.  Hugo,Maupassant and Flaubert were very frequent customers of prostitutes. Camus and Balzac also but not to the point of obsession.Syphilis killed Maupassant at 42.The three women she features,Colette, Sagan, and Dumas all had complicated tumultuous lives.
Groskup knows other readers of French literature would make different picks. I was surprised there was no chapter on Zola.  I would have loved to read her thoughts on Iréne Nêmirovsky who she says she considered.
Groskup includes a very informative and interesting suggested reading list.
I have read nine of the works.  I hope to read Dangerous Liaisons this year and reread Madame Bovary soon keeping in mind Groskop's analysis.
I am so glad I read this delightful book.
“Viv Groskop is a writer, comedian, TV and radio presenter and is the host of the chart-topping podcasts How to Own the Room on women, power and performance; and We Can Rebuild Her, a series of powerful interviews on reinvention, change and resilience, specially designed for the post-pandemic era. She is the author of five books including the best-selling How to Own the Room: Women and the Art of Brilliant Speaking (Transworld). In March 2020 Viv launched Lift as You Climb: Women and the Art of Ambition (Transworld), a companion volume to How to Own the Room. And in June Au Revoir, Tristesse: Lessons in Happiness from French Literature (Abrams) came out, a follow-up to The Anna Karenina Fix: Life Lessons from Russian Literature (Penguin). Her first book was a memoir about stand-up comedy: I Laughed, I Cried: How One Woman Took On Stand-Up and Almost Ruined Her Life.” From the author’s website
Mel Ulm