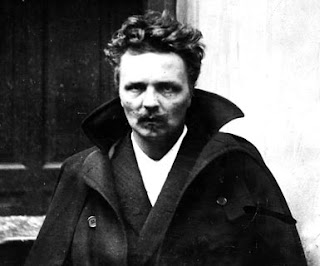 An Intense Drama of Character

August Strindberg (1849 to 1912-Sweden) was a very prolific and influential playwright.     Miss Julie is  the first of his works I have read.

Miss Julie has only three characters, and one of them is only on stage for a very brief time.   It takes place on the estate of a count, though he never appears.   The entire action of the play is in a series of intense conversations between the count's daughter Julia and Jean who is her father's footman.  (A footman normally was the senior servant in a large household, second to the butler.   He often personally attends the  master of the household.)   Jean is quite well read and has seen more of the world than one would expect for his position.   Julia is the spoiled apple of her widowed father's eye.   She was raised to thing of herself as the equal of men, a daring concept at the time.

Julia is sexually attracted to Jean.   He knows this is something he should not pursue as it could cost him his job.   Strindberg is pretty open for the time in letting us know that Julia and Jean have slept together.    The real issue is that neither can forget the dynamics of power in their situation.   Each one struggles to both love the other without reservations and to achieve domination in the relationship.

Miss Julia is also very much about social classes in 19th century Sweden.   I think it would take a quite good actor and actress to preform this drama.   The finance of Jean, a cook in the household has a very brief part.   It is basically one long conversation of Jean and Miss Julia concerning their relationship.

Imagine a Jerry Seinfeld episode featuring Elaine having a very intense conversation with her on and off again mechanic boyfriend and now imagine this directed by the great Swedish movie direct Ingmar Bergman in a setting where the mechanic cannot escape Elaine and you get the idea.

I read this via Dailylit.com.   You can easily find it online.   I am glad I read this work and will in time read, I hope, more of his plays.

The next drama I post on will be George Bernard Shaw's Androcles and the Lion.
After that I will read and post on Samuel Beckett's Waiting for Godot,  then The Cherry Orchard by Anton Chekhov and I will try my luck with Gogol's The Inspector General.   I am really enjoying reading these late 19th century-early 20th century European dramas and am open to suggestions as to what to read next.
Mel u