"The Jesting of Arlington Stringham" by Saki


One More from Saki

Saki on The Reading Life 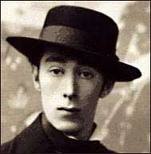 The same people that E. M. Forster and Ford Madox Ford wrote oh so serious works about Saki (pen name of Hector Munro-1870-1916-UK) had  a good natured time having some fun with.    Since my blog began in July 2009 I have posted on 13 of his stories and read 10 more that I did not post on.   Saki is a "surprise or twist ending" short story writer and is sometimes looked down on for that reason.   This is the readers loss as his stories are wonderfully written and often a very funny exposure of the foibles of the upper classes in Edwardian England.   Angus Wilson said Saki is kind of like an annoyingly clever and a bit  of a devilish child making fun of the real adults.

When I saw East of The Web:  Short Stories was featuring one of his stories I decided it would be a nice change of pace.

As "The Jesting of Arlington Stringham" opens Mrs Stringham and her mother are talking about something that Arlington had did that he had never done before in his many years in House of Commons, he made a joke during one of his speeches.   It might have not been meant as a joke but that is how the press reported it.   Mrs Stringham tells her mother she sees this as very bad omen:

" "Arlington made a joke in the House last night," said Eleanor Stringham to her mother; "in all the years we've been married neither of us has made jokes, and I don't like it now. I'm afraid it's the beginning of the rift in the lute."


"What lute?" said her mother.
"It's a quotation," said Eleanor.
To say that anything was a quotation was an excellent method, in Eleanor's eyes, for withdrawing it from discussion, just as you could always defend indifferent lamb late in the season by saying "It's mutton."

When  he comes home he makes a remark that makes no sense to his wife and she takes that as him showing off how clever he has suddenly become.
His wife is really suspicious now and she strikes back by with this nasty bit  of business that most long married men can probably relate to a bit:

"You had better tell it to Lady Isobel. I've no doubt she would appreciate it.".
Lady Isobel was seen everywhere with a fawn-coloured collie at a time when every one else kept nothing but Pekinese, and she had once eaten four green apples at an afternoon tea in the Botanical Gardens, so she was widely credited with a rather unpleasant wit. The censorious said she slept in a hammock and understood Yeats's poems, but her family denied both stories.

A few days latter Mr. Stringham makes another joke in the House of Commons as he is enjoying his reputation as a wit that is considered quite brilliant.   Mrs Stringham's good friend Gertrude tells her when she complains about it that she has heard Lady Isobel say the same thing numerous times.   The ending is pretty dark for a Saki story.

Several years ago, when I was on a short story binge, I read everything ever written by Saki. I think its time for a re-read. I agree with you that he is very unfairly underrated.

O Henry did twist endings too but Saki has a very original voice.