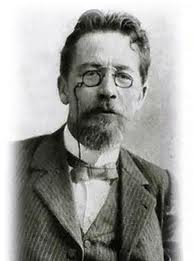 
My Prior Chekhov Posts


I always have the same thought in mind when I finish a work by Anton Chekhov (1860-1904-Russia, physician, probably best short story writer of all time-there is some background information on him in my prior posts).   That thought is that I have to read much more of his work soon.    Here in the Philippines we like to say that "pound for pound" Manny Pacquiao is the world's greatest boxer then maybe Chekhov word for word is the world's greatest writer.


Uncle Yanya is the first of his dramatic works that I have read.   I decided to read it pretty much on impulse when I was browsing through the selections at Dailylit.com.   I am very glad I did and have now put his other three major plays on my TBR list.


The play opens on a country estate.      The conversation in the opening act begins with a discussion of how bored the doctor for the area is with his life.   There are only nine characters so it is not that hard to keep them straight and each one has there own conversational style.    We have the estate owner,  a bored country doctor, a retired professor and his beautiful second wife, his daughter (the same age as his wife) and Uncle Vanya and a few others.


The drama in the play comes from the reaction of the characters to the retired  professor.     He is either a great genius or a typical academic time server depending on who is talking.   There are some very interesting conversations with and about the beautiful young wife of the professor as to whether or not she can really love her much older husband.


The ending is tragic.


Uncle Vanya is a harsh look at sadness in the lives of  the characters.   It is about boredom.  The characters in the play do speak in a way one would expect those in a Russian drama to speak.


There is no translator credit given for this work by Dailylit.com, maybe it is by Constant Garnett.


I really endorse this for anyone into his short stories or novellas.   I would love to see it preformed.   I think if it was you first exposure to his work you for sure would want to read more (unless you found the ending too bleak).


Please share your experience with Russian drama with us.   The next play I will read will be Ghosts by Ibsen.

Two great movie versions from 15 or 20 years ago:

Vanya on 42nd Street, perfectly acted, to the point where it will ruin lesser interpretations. Really brings out the comedy, too.

Country Life, in which the play is simplified a bit but is brilliantly adapted to Australia.

I have seen the play twice, once played perfectly by veteran actors having a ball, once played dully, with scenes often weirdly accelerated, with the crucial exception of Sonya. Her final monologue is a great challenge for an actor.