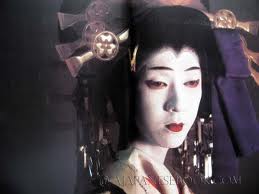 Behind the Kabuki Mask

My Prior Posts on Yukio Mishima

A Yukio Mishima  (1925 to 1970) story translated by Donald Keene, this is as much of a guarantee of sublime quality as you are going to get anywhere.

Mishima (some times he is listed Mishima Yukio as he is in The Oxford Book of Japanese Short Stories) is a very complicated writer and man.   If someone were to ask me which Japanese fiction writer will teach you the most about Japanese culture, I would  answer "Mishima".    He is on my read everything that has been translated list.   (There is some background information on him in my prior posts on him.)

One question that should be asked in talking about national literature is what do the writers from the country have in common besides where they live and the language they speak?    For example Irish Short Story writers all have to define themselves with reference to James Joyce.   Their literary tradition demands a very high level of learning and intellect  from their writers.   They all at some point have to deal with the consequences of British colonialism and the disputes between Catholics and Protestants.   They all work in the background of great historical suffering combined with tremendous national pride.   All of their potential readers know that Ireland produced the most important novelist, poet and playwright of the 20th century and beyond.

In Japanese literature one of the common characteristics (this  begins to fade out as one reads works written much after 1975 or so) is that an author can assume his readers know the very ritualized conventions of Japanese theater as well as the symbolic meaning of flowers, trees and animals.   This allows him to add layers of meaning to his story.

An onnagata is a male actor who plays a female part in a Kabuki theater.   (There is a very interesting article here on the history of the onnagata )   Homosexual relationships were often depicted in Kabuki performances.   Just as in Sparta, an apprentice samurai was expected to accede to the sexual requests of his master.   This was not seen as a sign of a lack of masculinity but as a mark of respect.

Our story centers on the life of a onnagata.   It is expected that in order to be at his best on stage that he will live his life as if he were a woman.   As such they are considered more feminine than ordinary women because they deliberately decide to act in accord with stereotypes.   Mishima does a wonderful job with notions of the blurring of the genders.   This is a beautiful brilliant story.

The story does a great job in taking us into the life and mind of the onnagata.   There is a tradition of theatrical prostitution and it was considered a near rite of passage for a young Japanese man of noble background to have this experience.

There is a historical irony here.  It is said that when Czar Nicholas II went on a tour of Japan (prior to ascending the throne) with his good friend Prince Youssoupon they visited a Japanese brothel in which the employees were all men dressed as Kubuki characaters.   From this the Russian leaders were said to have concluded that all Japanese men were like this so they felt they could easily beat them in a war.   Thus they lost the Japanese Russian War which helped set into motion the events that lead to the downfall of the Czar.

Great post love the historical note at the ending.,

It is typical how people judge a physical appearance of someone and conclude that the whole nation is such. In this case the Kabuki.

Interesting intro to one of my favourite author. I agree that he is complex. Big thanks.

I don't think this is the kind of novel I'd enjoy reading, but you make it sounds a lot more appealing than I would've thought.