"The Bears of Nametoko" by Kenji Miyazawa 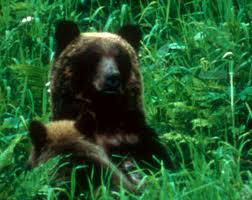 A Very Moving Story about the Japanese Brown Bear 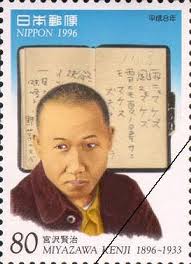 Kenji Miyazawa (sometimes the names are reversed) is a new to me writer.    Several of his novels, children's books, and a collection of fables are available in English translation.    A number of animes have been made based on his stories.

Kenji Miyazawa (1896 to 1933-Iwate Japan) was a very devout Buddhist and lifelong vegetarian.   He was born in a rural area into a wealthy family of money lenders.   From his earliest days he was disturbed by his families exploitation of the poor people in the area.   He received a degree from an agricultural college.   Differences with his father caused him to move to Tokyo where he met well known poets and short story writers who encouraged him in his ambition to write children's stories.   He published his first collection of stories at his own expense.  It was a literary but not a commercial success.   Upon the illness of a sister, he returned to the family property and did all he could to help the poor farmers of the area.   He died at 36 of the pleurisy that plagued him for many years.

From researching his life and from just reading "The Bears of Nametoko" I think I can sense that Kenji Miyazaawa was a very good person, totally dedicated to the principals of his faith with a great sensitivity toward suffering.

There is really only one human character in  "The Bears of Nametoko", an old hunter of brown bears.   Brown bears are valued for their livers (thought to have medicinal properties -this is still believed and may well lead to the extinction of the bear in Japan soon) and their fur.   When ever the old hunter, always accompanied by his faithful dog, kills a bear he apologizes first and explains to the bear it is his destiny to kill him just as it is the destiny of the bear to be killed by him.   The old hunter used to have a big family but they all died out from diseases.

It was very sad to read the description of the old hunter cutting out the liver and skinning the fur and throwing out the rest of the body.   It must have been very hard for Kenji to write it given his beliefs.

The old hunter takes his skins and livers to town to be sold to a merchant who has been cheating him for years.

In one very magic and moving scene, the old hunter is about to kill a bear and the bear speaks to him.   The bear tells the old hunter if  you let me live two more years to raise my cubs two years from today you will find me dead in front of  your hut.   The bear keeps her word.   I hope one day to read more of his work.   He seems like he was a very wise, gentle spirit.

"The Bears of Nametoko"  is some where between a short story and a fable.   I see  it as a world class quality work.   It would be an excellent class room story for those 10 or so on up.

This story is included in The Oxford Book of Japanese Short Stories.