The last Japanese literary work I posted on in 2010 was The Dark Room by Junnosuke Yoshiyuki (some times reversed).    If Flaubert and Guy de Maupassant  wanted someone to show them Tokyo's seedier side he would be the man for the job. 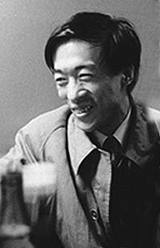 The very first book I reviewed in 2010 was The Tales of Ise by Arihara no Narihara, a collection of short poetic works written in the late 10th century.    These poems deal largely with the ritual of courtly love in medieval Japan.     We learn of the elaborate conventions a man had to use in attempting to court a Nobel lady. A man might hope after months of courtship to be given a   flower that had been touched by the object of his affections.

Things are quite a bit different by the time we get to the post WWII world of   The Dark Room by Junnosuke Yoshiyuki. (1924 to 1994- Yoshiyuki was a professional writer and journalist who won several prestigious literary awards. )     In his autobiographical novel our courtly hero utters such romantic lines as"pull off your pants promptly, I only have a few minutes on my lunch break".   What courtly lady of the late 20th century could resist the  enthralling flattery inherent in "your sexual skills are on a par with a lesbian prostitute I see regularly".   There seems a near obsession with prostitutes in contemporary Japanese literature.    We see this in the work of Natsuo Kirinio and in The Rivalry by Nagai Kafu .     In some of the works ofJunichiro Tanizaki we also see relationships between the sexes treated as fetish based economic encounters.   Haruki Murakami  gives prostitutes a large part in many of his novels.    Junnosuke Yoshiyuki loved prostitutes and the world of the pleasure quarters.     The central character of The Dark Room sees his lose of traditional values as a result of the Japanese defeat in WWII.   Japanese values were based on the belief in the sacredness of the Emperor and the Samurai Code.   Neither of these faiths could be sustained after

the Japanese lost the war and the Emperor announced he was but a man.

"Three Policemen" is set in a bar late at night in Tokyo.   Our narrator and his old Friend Miki are out on the town looking to have some fun.   They are in a "girlie" bar of some kind, though a more respectable one, of course.   Our narrator and Miki are at the bar.  He begins to brush her long beautiful hair.   One by one he begins to undo the buttons on her blouse.   I will let the narrator tell us what happens.

"I undid them all.  The standing next to Miki I touched the collar of the dress with my hand.   The garmet immediatley slipped over Miki's bare shoulders and fell forward.   Unrestrsained by any bra, the curves of Miki's breasts were revealed for all to see.   They were quite large with beautiful pale pink nipples"

The manager comes running over and tells them "Hey we can't have ladies doing things like that in here.   What if the police walk in?   He does up her dress and a sigh could be heard from some of the bar patrons.

He buttons Miki up.   He tells the offended people in the bar, especially the other girls whose breasts do not measure up to Miki's that they would not be offended if a man had breasts like these showed them off.   Miki is indignant but the tone of her voice is that of a "typical gay-boy".

The narrator and Miki are old friends (more we do not know) and it is a ritual of theirs to do this in all the bars they go to.  In some of the bars they go to they are well know so they only do their routine for the bar customers.

Miki and her friend hit a couple more bars.   They run into three policemen but there is no trouble.

I found "Three Policemen" a fun vicarious night out on the town.   Is it s bit of a celebration of behavior many would regard as perverted or immoral?   Maybe some would but I had a great time visualizing Miki showing his breasts in a little bar in the Tokyo Night Town World.   I found the friendship between Miki and the narrator very well done.

This story is another one from the great collection The Oxford Book of Japanese Short Stories edited by Thomas Goossen.   As far as I know it cannot be read online.   "Three Policemen" may not be great art but it was fun, but it  made be laugh and left an interesting image in my mind.

Have ordered this from a certain online store, thanks.