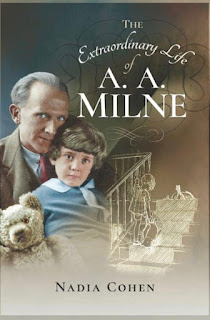 The characters created by A. A. Milne in his two Winnie the Pooh books, Winnie-the-Pooh, Christopher Robin, Piglet, Eeyore (my favourite), Kanga, Roo, Tigger, Oslo  and Rabbit have obtained the status World Wide of folk characters. 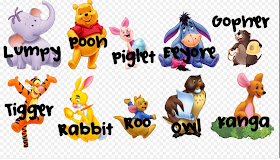 Millions have these characters as their first remberances of stories.  Many a senior Oxford Don still smiles when she thinks of The Hundred Acre Woods just like ten year olds all over the world do when they watch the Disney Cartoons.  Six year olds scream when they get a stuffed Winnie The Pooh character at Christmas.  Some sixty Plus year olds still have theirs on display.  As Cohen tells us, the books made Milne very rich.  Long after Milne’s passing huge revenue is still generated from merchandise, book sales (now translated into a growing multitude of languages), film rights.  Disney hit the Jack Pot when they bought the rights to the books.

“The rights to the characters were sold to Disney in 1961 and boosted profits for the US conglomerate more than anyone could have predicted. Alan knew Pooh was popular but he had no idea the vast scale of what imagination had created. Disney merchandise sales still continue to rake in an astonishing $3 billion a year today and rising – second only to Mickey Mouse. In 1966, Disney artists animated a Pooh story for the first time, called Winnie The Pooh And The Honey Tree. It smashed box office records, and scores of films and television adaptations have followed.” From the book

The characters are kind, gentle, and loving. 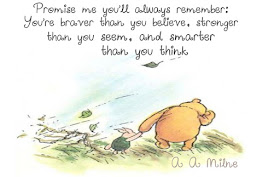 Milne based the stories on the stuffed animals of his son Christopher Robin.  Cohen explains the extreme popularity of the books bothered his son throughout his life, he never accepted everyone being curious about him.  This created a lingering rift between  Christopher  and his father.  Milne was a very prolific multi-genre writer and a highly succesful playwright.  He fought for England during World War One, seeing intense battlefield action in France.  From this experience he wrote works condemming war.  Cohen shows us how his growing awareness of the atrocities of Hitler changed his mind.  It was very interesting to learn that he never forgave his one time close friend P. G. Woodhouse for doing prooganda broadcasts from France for the Nazis. 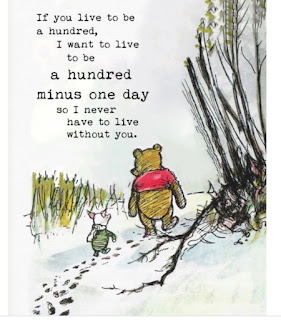 Cohen goes into problems in Milne’s marriage.  He and his wife both had long term affairs, Milne with an actress in several of his plays.  There was big money from plays and Milne made more money than he knew what to do with.  They stayed married partially out of internia but they lost any sense of intimacy.

Milne half way resented the success of the Winnie the Books, no one paid any attention to his many other works.

If you loved the stories then The Extraordinary Life of A. A. Milne then this is a biography for you.  I am glad I read this book.

“Nadia Cohen is an author who has written more than a dozen historical and contemporary biographies.

The Real Beatrix Potter will be the latest in a series of fascinating in-depth biographies about apparently whimsical children’s story tellers who actually hid a darker side behind the public facade. Others already published include The Extraordinary Life of AA Milne, The Real Roald Dahl and The Real Enid Blyton.

In a previous incarnation as an entertainment reporter she worked at various newspapers and magazines in London including Grazia, The Daily Mail and The Sun, covering showbiz news, film festivals, premieres and award ceremonies around the world. She was headhunted to join the launch of US magazine In Touch Weekly and spent several years working in New York and Los Angeles before returning to London to produce a series of documentaries for ITV.

Nadia lectures in Journalism at University of Winchester and is the editor of digital lifestyle magazine Box Ibiza”. - https://nadiacohenauthor.com/