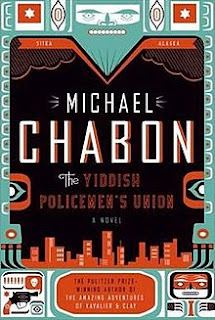 Winner of The 2007 Hugo and Nébula Award for Best Novel

In February of last year I read Michael Chabon’s The Amazing Adventures of Kavilier and Clay.  I got bored with it about half way through but because of the creative power of Chabon I completed the work.

This year I decided to read his Multi-Awarded alternative history novel The Yiddish Policemen’s Union.  I have been Reading in Yiddish literature and associated history for almost eight years now.  I was intrigued by idea of Alaska having been turned into a refuge for Jews during the early years of World War Two, the premise of The Yiddish Policemen’s Union.  Because of this four million mostly Yiddish speaking Jews were saved from from the Holocaust.

The Jewish state was initiated in 1941 with a sixty year mandate after which time unless the American government makes it a state ths Yiddish capital, a Yiddish speaking city with, in 2001, several million residents, will become part of Alaska.

Chabon mentions in brief allusions other changes in history.  In 1942 The Germans defeated Russia, in 1946 the war ended when Berlin was totally destroyed by nuclear bombs.  The state of Israel was wiped out in 1948.

The plot line centers on a detective plot, a murder mystery.  The detective is a member of the Yiddish Policemen’s Union.  Chess plays a big part in the story line.  We encounter lots of sorts of individuals.  We see how the Yiddish speakers and Alaskan Indians interact.  They even marry.  There are a lot of Yiddish words employed.  There is even a glossery included.

This seems to me a book for those intrigued by the alternative history presented.

Michael Chabon (b. 1963) is an acclaimed and bestselling author whose works include the Pulitzer Prize–winning novel The Amazing Adventures of Kavalier & Clay (2000). Chabon achieved literary fame at age twenty-four with his first novel, The Mysteries of Pittsburgh (1988), which was a major critical and commercial success. He then published Wonder Boys (1995), another bestseller, which was made into a film starring Michael Douglas. One of America’s most distinctive voices, Chabon has been called “a magical prose stylist” by the New York Times Book Review, and is known for his lively writing, nostalgia for bygone modes of storytelling, and deep empathy for the human predicament.  .from Goodreads