"One of the Best Horror Stories"-Stephen King 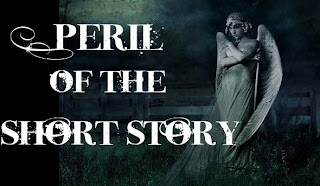 A True Classic of the Paranormal Fiction
I am having a lot of fun reading short stories for Carl V's R I P reading event (Sept 1 to Oct 31).   The rules are on his blog but he has made it fun an easy for all to join in this great community building activity.   So far I have posted on Japanese, Irish and English paranormal short stories.   Today I read one of the true classic short stories of the paranormal and the occult, "The Great God Pan".

I first learned of Machen (1863 to 1947-Wales in the UK) when I did a bit of research for my post on a much better known writer in this genre, P. K. Lovecraft. Machen was one of  the writers that inspired Lovecraft who in turn was hugely influential among paranormal writers.
About the time of this story there was a lot of interest in the Occult in England.    Much of the interest was centered in various mystical orders such as The Golden Dawn.   These orders were frequented by true believers and charlatans and those just seeking an alternative faith.   Many of the "Gurus" of the period styled themselves as in possession of occult lore going back through Elite Masonic groups back to ancient Egypt.     Machen began to develop an interest in the occult when his wife died of cancer.
As the story  opens a surgeon is about to do for the first time an experimental brain surgery procedure that will allow his ward Mary to see the great God Pan (by which he means the reality under the world  of illusion.)   Here is what happened when Mary comes out of the ether (I want to quote a bit as it is the wonderful atmosphere created by the magic prose of Machen that makes this story work.

Suddenly, as they watched, they heard a long-drawn sigh, and suddenly did the colour that had vanished
return to the girl's cheeks, and suddenly her eyes opened. Clarke quailed before them. They shone with an
awful light, looking far away, and a great wonder fell upon her face, and her hands stretched out as if to touch
what was invisible; but in an instant the wonder faded, and gave place to the most awful terror. The muscles
of her face were hideously convulsed, she shook from head to foot; the soul seemed struggling and shuddering
within the house of flesh. It was a horrible sight, and Clarke rushed forward, as she fell shrieking to the floor.
Three days later Raymond took Clarke to Mary's bedside. She was lying wide-awake, rolling her head from
side to side, and grinning vacantly.
"Yes," said the doctor, still quite cool, "it is a great pity; she is a hopeless idiot. However, it could not be
helped; and, after all, she has seen the Great God Pan."


This is really a densely written work that really should just be boiled down but here goes.   Mary has a child who the doctor sends to a family to be taken care off while providing a generous allowance for her.   She begins to do terrible things then at about age 16 she disappears.   One of the "characters" in this story is the city of London.   Machen takes us to places the respectable never see in the company of one of the man characters in the story who is kind of a connoisseur of the darker side of London.

We meet Helen Vendler.   If you have read Rebecca by Daphne du Maurier you have met a beautiful woman with a strange sinister past and for sure Helen Vendler is in that mode.    Suicides, murder, occult signs,  house where unspeakable things are done, and a once very wealthy man found wandering the streets as a beggar are just a few of the things that happen in "The Great God Pan".

Here are the final words of  the story:


"Such, Raymond, is the story of what I know and what I have seen. The burden of it was too heavy for me to
bear alone, and yet I could tell it to none but you. Villiers, who was with me at the last, knows nothing of that
awful secret of the wood, of how what we both saw die, lay upon the smooth, sweet turf amidst the summer
flowers, half in sun and half in shadow, and holding the girl Rachel's hand, called and summoned those
companions, and shaped in solid form, upon the earth we tread upon, the horror which we can but hint at,
which we can only name under a figure."


To really sum up the plot would take long  a post.   This is a fun scary story that is a classic horror/weird tales work.    It is said to have influenced R. L. Stephenson in the his "Dr Jekyll and Mr. Hyde" and I can for sure see that.


You download "The Great God Pan" in numerous formats here.

I was hoping you would read and review this one after what you said about it and King's thoughts on it in your other post. Yep, definitely going to have to track this author down. Sounds so good.

This sounds a little like some of John Buchan's supernatural tales. Not surprising, I suppose, because they would be more or less contemporary. One of those must-reads for people curious about the history of supernatural fiction, I should think.

Hi Mel, there's one of Buchan's collections of stories, The Moon Endureth, on Gutenberg (and in various other places depending on how you prefer to read it). The story I was reminded of reading about Machen was The Grove of Ashtaroth, which is in this collection; I like too The Rime of True Thomas, because it's set in my it of the world, and I do like the lapwing that speaks Lowland Scots! If you enjoy Buchan's supernatural stories, I really do recommend his novel Witchwood, which I'm pleased to find is available (in the UK at least) on Kindle.

I'll be interested to know what you think of Buchan's stories.