"The Vampyre" by John Polidori

Is This the First Appearance of the Vampire
in English Literature? 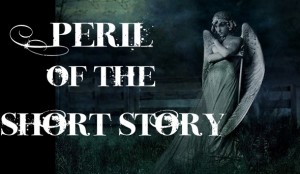 I am having a lot of fun reading Gothic and paranormal short stories for Carl V's R I P reading event dedicated to these themes.   I am sort of focusing on some of the early masters of the genre (if one may call it that) like Arthur Machen, Sheridan Le Fanu, Algernon Blackwood and Gerald Griffin.   I have also posted on a paranormal story by an Indian and a Japanese writer.    The literary fixation on the paranormal is hardly a new trend. 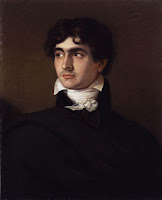 "The Vampyre" is by John Polidori (1795 to 1821)  who was born in London.   His father was an Italian emigre who was a well known scholar of Italian political history.   His mother was a governess.    He became a physician at age 19.   He was the uncle by marriage of Dante Rossetti, from his sister's marriage.


It appears Polidori first became interested in writing after he became the personal physician for Lord Byron.   He was paid by a publisher to keep a journal of the trip.  At one point they spent some time with Mary and Percy Shelley.    Byron suggested one evening that they all should try their hands at writing ghost stories.   Mary Shelly's story became the basis for her Frankenstein.    "The Vampyre" was Polidori's story and is by far his most famous work, really the only part of his work still read.


My research indicates this story might well be the first appearance of a vampire in English literature.


As the story opens young Aubrey is traveling in  Italy in the company of Lord Ruthven, whom he has recently met.  Lord Ruthven has an enigmatic background and has just recently made his appearance in society.  (This does sound like the start of lots and lots of paranormal stories.)   He parts company with Ruthven when he seduces the pure daughter of one of his friends.    While in Greece, Aubrey develops a fondness for the daughter of the keeper of an inn where he is staying.  (Inn keeper's daughters are another standard fixture now.)   Ruthven by seeming coincidence shows up at the same inn.   The daughter is shortly killed by a vampire but Aubrey does not connect it to Lord Ruthven.   They begin to travel together again only to be attacked by bandits.   Ruthven receives a seemingly  fatal wound in the attack.   As he dies, he makes Aubrey swear he will not reveal anything about his death for a year and a day.


Aubrey goes back to London.   He is amazed when Lord Ruthven reappears in London society seemingly in perfect health.   Aubrey is deeply shocked by this as he thought he witnessed the death of Ruthven.   Ruthven begins a romance with the sister of Aubrey.    He reminds Aubrey that his vow prevents him for a year and a day telling anyone what he knows of him.   Ruthven seduces his sister and the anxiety causes Aubrey to have a breakdown.   Spoiler alert.   Ruthven and the sister are due to be married on day the before the oath will expire.   Aubrey sends her a letter warning her away from Ruthven.   He sends the letter but it does not arrive in time.   The morning of the wedding night she is found dead, drained of all of her blood.   Ruthven has vanished.


The language of the story may seem old fashioned to many people.   I found it very charming.   Here is a good sample to allow you to decide if you like it or not.


It happened that in the midst of the dissipations attendant upon London winter, there appeared at the various parties of the leaders of the ton a nobleman more remarkable for his singularities, than his rank. He gazed upon the mirth around him, as if he could not participate therein. Apparently, the light laughter of the fair only attracted his attention, that he might by a look quell it and throw fear into those breasts where thoughtlessness reigned. Those who felt this sensation of awe, could not explain whence it arose: some attributed it to the dead grey eye, which, fixing upon the object's face, did not seem to penetrate, and at one glance to pierce through to the inward workings of the heart; but fell upon the cheek with a leaden ray that weighed upon the skin it could not pass.


If you are interested in older paranormal and Gothic stories, you probably will enjoy reading "The Vampyre" and you will see a lot of the things that have become part of the standard fixtures of the vampire story in this work.


You can read it online HERE


I hope to soon post on two other earlier masters of  the paranormal short story, M. R. Smith and John Buchan.

Sounds spooky.
I have linked to your post on Guy De Maupassant's Necklace in my short story post.

Che-thanks for the link and the visit as always

Mel you always find the most fascinating pieces! I have hear of but had never read Vampyre. Now I have it bookmarked and hope to get there very soon.

Plus in your linkwithin I saw a post on one of my old favorites The Monkey's Paw. Now that's good stuff!

I'm going to go back and poke around some more and see what else you have up your literary sleeve!

Great find Mel, and It's amazing how many of the elements that have become the standard cliches of the Vampire genre are in this tale.

Parrish Lantern-yes it has a lot of the basic elements-

Jillian-I hope so much you enjoy it-please let me know your reaction to it-I also just posted on another classic ghost story, this one from 1904, by Montague James you might enjoy. Thanks so much for your visit.

I first heard about that story with Byron, Shelley, and Polidori last year when I read the annotation edition of Dracula, which provided a history of the vampire story. If I remember correctly, you're right, this one's the first. I've wanted to read this since I first heard of it but I'm not sure if I'll get to it this year as my Oct. reading month is getting rather crowded. :) Sheridan Le Fanu's Carmilla sounds enticing too.

That evening where they all thought up ghost stories was truly a historic evening for literature!