Waiting for Godot by Samuel Beckett-Japanese Literature and Beckett

Waiting for Godot by Samuel Beckett (1949, a play in two acts)

Most Important Drama  of the 20th Century
Japanese Literature and Beckett 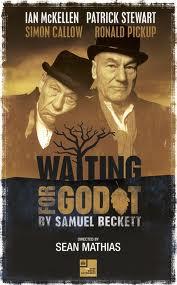 "There is the kind of seriousness whose trademark is anguish, cruelty, derangement. Here we do accept a disparity between intention and result. I am speaking, obviously, of a style of personal existence as well as of a style in art; but the examples had best come from art. Think of Bosch, Sade, Rimbaud, Jarry, Kafka, Artaud, think of most of the important works of art of the 20th century, that is, art whose goal is not that of creating harmonies but of overstraining the medium and introducing more and more violent, and unresolvable, subject-matter. This sensibility also insists on the principle that an oeuvre in the old sense (again, in art, but also in life) is not possible. Only "fragments" are possible. "-Notes on Camp, Susan Sontag


I think this is perfectly applicable to Waiting for Godot.

During Irish Literature Week I  I did a post on two very strange short stories by Samuel Beckett (1906 to 1989-Ireland-Nobel Prize 1969).   I really enjoyed the experience of reading the stories and left them with the feeling they were expressing something quite profound.   Unfortunately I had no idea what that was.   My post on these short stories was the least viewed of my 19 posts for the week.


Waiting for Godot has, as far as my limited research tells me, has no rivals for the title of most important dramatic work of the 20th century.   (I am glad I read Ubo Roi by Alfred Jarry before reading this.)    I was pondering how to post on the work.   I could, of course, rattle on about the themes of the work-absurd universe, European values in disarray, etc.   Instead I will just make a few observations.


Often it seems to be said that the lead characters are tramps.   Beckett said he had no such idea in mind.   There is one reference to one of the characters asking the other where they slept last night suggesting he had no home.   Maybe this is part of where the idea comes from.   I think Waiting for Godot is a very Irish literary work.


Part of the Irish tradition involves characters in stories and plays swapping exaggerated barbed insults at each other.    In  many of the fables and short stories of Ireland we encounter strangers having deep conversations with each other.   The famines and the times of troubles created many wanderers.    A wanderer along an Irish highway might be a sage, a fairy in disguise, or an evil spirit of some kind.    People do not quite carry on conversations but have linked monologues.    Post WWII Europe produced millions of wanderers, lost souls out on the highway.    Those still in their comfortable homes (perhaps kept at the compromise of their values) liked to see the wanderer as but a tramp.   It is very hard to admit he may know important truths you do not.


"There is a long established literary tradition of using the insane to say what cannot be accepted by those in fully sunlit worlds.    The narrator of  The Day He Himself Shall Wipe Away My Tears has very deep roots in western culture.    His ancestors were in the plays of Euripides, his great grandfather was Dostoevsky's  underground man,   he speaks through Crazy Jane.   Oe has stated that he has come to understand the meaning of his own works through reading the poetry of William Butler Yeats."


Waiting for Godot is firmly in this tradition.


I think the best way to first read Waiting for Godot is just to enjoy the wonderful and crazy conversations, try to get inside the personalities of Vladimir and Estragon, read the long passages slowly,   wonder who Godot is and why they are waiting for him but really just enjoy it.


You can read it online here


Readers of Japanese literature should read this work for sure.   I see strong echos now of Beckett in the plays of Yukio Mishima.   I think Beckett probably owes his own debt in turn to classic Japanese theater.


Please let is know of your experience with Beckett

I've always hated Waiting for Godot since it was compulsory reading in our first year of college. It seemed so pointless and vague, and I never understood why it was necessary to write a play that had no point. Also, I hated anything that was existentialist in its scope. (I still don't care for it.)

However, after reading your commentary on how Irish this play is, with their faerie superstitions AND what the war had done to the psychi, especially of those who'd fought and been closely affected by it, I guess this play would make sense. I think I'd like to try it again from this perspective and see if I wouldn't hate it so much after all...

Great review, btw! I really like your little piece on the western culture having influenced contemporary Japanese lit.

I've read Waiting for Godot and seen it performed. Since its so nonrestrictive in its form and format, it really lends itself well to re-interpretation by the actors.
I had no idea about the Irish story tradition. This really puts a whole new spin on the play.