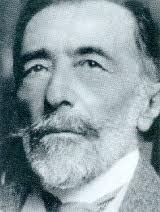 I have recently posted on two short works of fiction by Joseph Conrad  (1857 to 1924).  He was born in Poland but became a British citizen and is considered one of the greatest of English novelists. In the long ago, I read most of his major novels, in the last year I have read his "The Lagoon" and his very famous The Heart of Darkness.   I ended up doing two posts on The Heart of Darkness, the second one was a follow up to some great comments from readers.


I am reading through all of the short stories in a wonderful 1947 anthology of short stories my cousin Bonnie kindly gave me.   It has been in the family since publication so the book means a lot to me.  There are a lot of wonderful stories by new to me authors and I have posted on some of them.   "Secret Sharer" was one of the stories included in the collection.


"The Secret Sharer" is a very weird hard to put a meaning on story, or at least it was for me.  There are two main characters in the story.   The captain of a ship at sea is one of them.   He is  newly appointed and does not know much about the crew or the ship.   The second main character is a man who swims naked up to the ship while it is far from sea.   The captain is the only one who sees the man and he takes him into has cabin and hides him.   He finds out the man has murdered a man on a ship and jumped overboard to escape.   The captain keeps him hidden in his cabin for several days.   He even endangers the ship to help the man escape.


The mystery in this story is why the captain does what he does.     Maybe it is wrong to look for a profound meaning in this story, maybe it is just a very well done story of the sea.


You can find almost all of Conrad's fiction online.


The next Conrad work I read will probably be "Amy Foster".

Mel, this sounds complex and worth reading! I look forward to more reviews from this collection of short fiction.