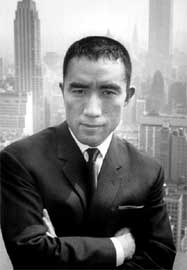 "Swaddling Clothes" by Yukio Mishima (1925 to 1970-Japan) is a very strange story that compresses a really lot into just a few pages.   It is really must reading for devotees  of Yukio Mishima as it contains in just four pages much of the basic themes of the work of Mishima.   I am not inclined as of now to make a list of "best Japanese authors" but I will say if one wanted to read the full translated oeuvre of a Japanese writer with the objective of learning as much as you could about all aspects of Japanese culture I would say read Mishima (no small task with nearly fifty works available in translation) over all other authors.   (There is some additional background information on him in my prior posts.)


"Swaddling Clothes" begins with a woman from a good family recalling with great embarrassment the story her actor husband told a number of their friends.  A lot of the themes of Mishima can be dug from these remarkable lines:


Earlier that evening, when she had joined her husband at a night club, she had been shocked to find him entertaining friends with an account of “the incident.” Sitting there in his American-style suit, puffing at a cigarette, he had seemed to her almost a stranger.        “It’s a fantastic story,” he was saying, gesturing flamboyantly as if in an attempt to outweigh the attractions of the dance band. “Here this new nurse for our baby arrives from the employment agency, and the very first thing I notice about her is her stomach. It’s enormous—as if she had a pillow stuck under her kimono! No wonder, I thought, for I soon saw that she could eat more than the rest of us put together. She polished off the contents of our rice bin like that....” He snapped his fingers. “ ‘Gastric dilation’—that’s how she explained her girth and her appetite. Well, the day before yesterday we heard groans and moans coming from the nursery. We rushed in and found her squatting on the floor, holding her stomach in her two hands, and moaning like a cow. Next to her our baby lay in his cot, scared out of his wits and crying at the top of his lungs. A pretty scene, I can tell you!”


The husband and the doctor he calls have complete contempt for the poor to them totally ignorant servant woman.   They wrap her baby in newspapers just to show their contempt for the baby.    The woman begins to think about how the baby will never have a chance to grow into a successful person of any kind.   She sees him as doomed to a life of poverty and crime by the degrading way he was brought into the world.   She begins to imagine he will one day grow up twenty years hence and will in a random senseless act stab her own son to death.  You can also see the very common theme of Mishima relating to the corruption of Japanese culture by the intrusion of Americans (something very strongly felt in still occupied Japan at the time of the writing of this story).

Now the story in its extreme artistry relies on the reader's help to determine what happens next.   Was the woman murdered that very night in a knifing or has twenty years gone by and has the mother intentionally been guided by paranormal elements to stand in for her son at the time of his murder by at the hands of the maid's baby?


You can read this story online HERE

Hi Mel , recently finished Patriotism by Mishima & like you I think to understand an aspect of Japanese culture you should read him, although, I personally think he represents only an aspect of it.

Fascinating. Thank you for sharing.

A bit of noir? Do I really want to read Mishisma?

Harvee-do you really want to read Mishima?-I would say you owe it to yourself to try!-thanks so much for your visit

bokusenou-an online short story by Mishima is a great find! I hope you enjoy it.