A Powerfully Intelligent Gothic Tale
from the American South 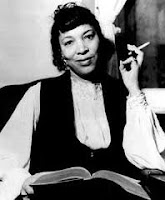 Zora Hurston (1881 to 1960-Alabama, USA) was one of the leading writers of the Harlem Renaissance.   Hurston had a very interesting life.     Born in relative poverty she attended   Howard University until she was offered a scholarship  to attend Barnard college, an elite women's college at which she was the only person of color in attendance at the time.    She graduated, along with her very famous co-student Margaret Mead, with a degree in anthropology.     Her anthropological focus was on  the customs and speech of African-Americans living in the rural south of the USA.    Hurston studied and wrote about  people of color from small towns in Alabama and Florida very much as her mentor and former professor, Ruth Benedict did in her famous studies of the customs of the people of Polynesia.    Hurston also wrote and published a number of short stories, and novels.    Her most famous work was her novel, Their Eyes Were Watching God.    She co-wrote a play with Langston Hughes.

"Black Death" (1921, 8 pages) is set in Orlando Florida USA in the 1910s.    It is a really brilliant account of race relations at the time.   It also goes right to the heart of the origin and role of paranormal stories in many cultures.    I have been having a lot of fun reading and posting on older paranormal short stories for Carl V's great paranormal reading event, The RIP Challenge (Sept 1 to Oct 31-the simple rules are on Carl's webpage).   One of the things I am discerning in the stories is that an interest in the occult is often an "escape valve" for people in an impoverished powerless situation who are oppressed by an exterior culture.   In Ireland it was the English.   In Japan it is a bit harder to see but it arises as a reaction of "country people" to the increasing westernization of Japan.     In "Black Death" Hurston directly  writes on this theme.   This is my second look at this story as I wanted to see again how it deals with the paranormal elements of African-American culture in the early part of the 20th century.

As the story opens we meet "Old Man Morgan", a black man who can kill anyone, he does it for money, with his magic.    We are told the whites of the community would laugh hysterically when told this and say "that just shows how ignorant the blacks are".

Besides "Old Man Morgan"  (I think the name is being used as a mockery of the American financier J. P. Morgan) there are three central characters in the story.    A young beautiful pure hearted woman, her very protective mother and a man with a great reputation as a lady's man in the Black community.   I will compress the story and tell a bit of it (not to much as I really think anyone who reads this story will like it as lot).   The young woman gets pregnant.   Her mother confronts the man and he tells her that he only promised to marry her daughter to get her in bed and besides he is already married and he laughs.   To make it all much worse, he tells everyone that the daughter is just a common tramp trying to extort money from him.    The mother wants the man dead.  She goes to see Old Man Morgan.    He asks her how she wants the man who ruined her daughter to die.    She tells him she wants to shoot him but does not have the courage.    I will leave the rest of the plot unspoiled for you.

The passage below will give you a good feel for her prose style.


In the swamp at the head of the lake, she saw Jack-O-Lanterns darting here and there and three hundred years of America passed like the mist of morning. Africa reached out its dark hand and claimed its own. Drums, tom,tom,tom,tom,tom,beat in her ears. Strange demons seized her. Witch doctors danced before her, laid hands upon her alternately freezing and burning her flesh. She cried out in formless terror more than once before she found herself within the house of Morgan.


You can read the story HERE.


Please share your experience with Hurston with us.  If you have any suggestions for older paranormal short stories (that can be read online) please let me know.

This sounds like a story I cannot pass up!

Yes, I just read it. It's definitely worth reading. I've added a link to it in my Sundry Short Stories post--I have not added any in ages but I had to include this one.

This is a really good story. I read 'Their Eyes are Watching God,'. A great novel.

I just read the story, and I liked it a lot. I first read Hurston (Their Eyes Were Watching God) a couple weeks ago form a class that I'm taking in multicultural librarianship, and I enjoyed her writing a lot. I like the way that Hurston's study of anthropology influences her writing. I also like the way that she creates strong female characters.

It's actually somewhat interesting that she wasn't more popular as a writer when she was alive. I think that a lot of other writers in the Harlem Renaissance didn't take her as seriously because she was female.

Does this story allude to the American Dream in a way?