In my post on A Woman in the Dunes by Kobo Abe I talked almost exclusively about what the novel seems to be saying or manifesting about the man.   We know the man's name, we know his job and we know a lot about his life passion entomology.   The man has a place in society,  he fits in and is valued for what he does and what he knows.   In most posts on the novel on Goodreads and elsewhere the focus is entirely on the man.   Then I started to rethink the book a bit.   It is not called Man in the Dunes. 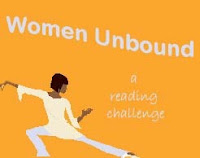 We first meet the woman when the male protagonist of the novel seeks a place to stay for a night and gets trapped in a giant hole in  the ground.   The hole in the ground is the home of a woman.   We find out that her husband and child were killed in a typhoon.   We only have a vague idea how she got there.   She has sex with the man or more bluntly said she allows the man to mate with her.   She shows herself naked to the man but it is not clear if this part of a seductive routine or if she like an insect without self consciousness at all.   We are given no insights into her thoughts other than that she has a foreknowledge of the fate of  man and that her life goal is to have a radio.   She does not wish to escape her circumstances.   She seems to see her existence as natural to her species.   Her essence is to be a woman used as bait to keep a man in a hole in the ground shoveling out sand that forever comes back.   In my initial comments on Woman in The Dunes   I went into existentialist interpretations of the novel,   focusing on the man trapped in an absurd meaningless situation.  Now, thanks to the stimulus of the Woman Unbound Reading Challenge I want to talk about the woman in the dunes.  The woman is the existential anti-heroine.   She, with no sense of doing it, is  utterly trapped by an essence, an essential nature that she is no more is aware of than a fish is aware of water.   She is used by the micro society  of the dune who,  not by conscious design, have fashioned her consciousness in such a way that she is useful mainly as bait for a man.   She does not question it.   If she was reflective enough to ponder the issue she would probably say something along the lines of "this what was meant to be" or see it as part of a supernatural design.   The woman maybe seen as evoking the fate of women in rural Japanese society.    Just as in Japanese society prior to the end of World War II, women and men were taught that there role in life, the essence of  their being, was to serve their overlords and their Imperial God, so the woman in the dunes sees no alternative to her life in a hole in the ground.   Expanded beyond this, the  WOMAN in the Dunes, is any woman (or man) bound by what she things is her essence when that essence is just a choice made for her by some one else to impose this on her.   Of course it regresses back.

Mel, your review of this woman is absolutely intriguing. I'll have to read The Woman in the Dunes.

Another interesting interpretation of this novel, Mel. I hadn't thought of her as 'bait' per se, but definitely agree with her resignation. Thank you for giving us two sides to ponder.

Excellent points. This may be why I found this book to be almost unbearably claustrophobia-inducing - I felt his powerlessness and her resignation.

I have a copy of this book tucked away somewhere... I wonder when I'll be ready to read it

I haven't read anything like this. Don't know if I could really appreciate it but your review has piqued my interest. Thank you.

I've heard great things about this book. It's refreshing to look at a book from different angles, especially in terms of the male and female perpectives, because I think you will always get something different out of it. A great review!

What a fresh perspective. Awesome review. I've never heard of this book so now I'll have to look into. thanks.