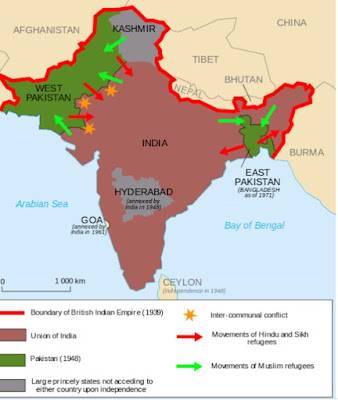 From Words Without Borders

"Rajinder Singh Bedi was born in Sialkot in 1915. He first worked as a clerk in the postal department; later he joined the Lahore office of All India Radio and wrote many successful plays, having meanwhile established himself as a highly nuanced fiction writer with the publication of Daana-o-Daam, his first collection of short stories. On Partition he moved to India. After working for a short period as Station Director for Radio Kashmir, he joined the Mumbai film industry producing and writing scripts for a number of successful films. His Urdu novel Ek Chaadar Maili Si, translated into English as I Take This Woman, received the Sahitya Akademi Award in 1965. Bedi, who died in 1984, is regarded as the second most prominent Urdu fiction writer after Sa’adat Hasan Manto."

Midnight August 15, 1947 bells rang all over the Indian Subcontinent celebrating the end of 190 years of British Rule.  In order to try to accommodate the Muslim and Hindi citizens, the largest groups, the country was partitioned into West and East Pakistan, meant to be Muslim, and India.  This final act by the English, in a long vicious history of exploration, lead to an estimated two million deaths and fourteen million refugees.  No accommodations were made for other segments such as the Sikhs.   Hundreds of thousands of women were raped by men of the other religion.  In the culture of the time, a raped woman should kill herself.  In any case, few married men would continue with them.  In part this should be seen as an excuse by young men to let out their hatred.  Eventually decent people on both sides began to try to convince everyone that raped and kidnapped women should be accepted back by their families.  The partition lead to one of the largest mass migrations in history.  (The Bangaldesh War of 1971, extimates of deaths are as high as two million can be clearly traced back to the Partition.) Women who lived close to the borders were very much in danger of rape and kidnapping.  Our story today deals how a married couple deal with this.

(From Stanford University, a good brief introduction to the Partition

Muhammad Umar Memon, recognized as a leading authority on Urdu literature, in his invaluable introduction to The Greatest Urdu Short Stories, tells us that Lajwanti by Rajinder Singh Bedi (1956) is one of the best literary accounts of the Partition.   (He acknowledges that Saadat Hasan Manto must be given priority in this area.  I have previously posted upon his work.)

As the story opens a committee has been formed designed to get people to accept back in the community women who had been raped or kidnapped by Muslims.  Conventional morality requires suicide to preserve honor.

"There was one programme, though, which seemed to have escaped notice. It concerned the rehabilitation of abducted women. Its rallying cry was ‘Rehabilitate them in your hearts!’ It was bitterly opposed by Narain Bawa’s temple and the conservatives who lived in and around it."

We learn that Laajwanti was a kidnapped wife.

"Early in the morning when Babu Sundar Lal and his companions Rasaloo and Neki Ram used to make their rounds through the streets singing in unison, Touch the leaves of the laajwanti,/ they curl and wither away! Sundar Lal’s voice would fade. Walking along in silence he would think about Laajwanti—who knows where she might be? In what condition? What would she be thinking of him?  Would she ever come back?—and his feet would falter on the cobblestone pavement."

During their marriage he was abusive to her.  A true man was expected to beat his wife on occasion.  No beatings was seen as a lack of love for his wife and a lack of masculinity.  Her husband says if she ever returns he will open his heart to her.  An exchange of women between border areas begins.  At first the Hindus complain only old ugly women are being returned, some are refused.
A friend tells her husband that he has seen Laajawanti on a truck of returned women.  When they are united her husband begins at first to wonder why she seems healthy and happy.

Conservative clerics cited passages from the Ramayana which support the idea that returned women should be rejected by their husbands, sons and even fathers.

When they are united her husband acts strange to her.  He no longer beats her. He sees her as a holy woman, she thinks he no longer loves her.

Just a simple story about two ordinary people whose lives were ruined by the Partition.

You can watch a video of the story, in English with Hindi subtitles, at the link below