The Hamilton Affair by Elizabeth Cobbs - 2016 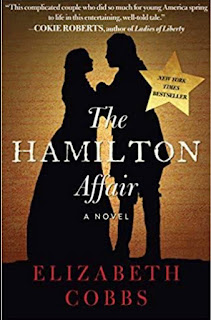 The Hamilton Affair by Elizabeth Cobbs is a first rate historical novel, bringing to life Alexander Hamilton, his wife, and his era.

But before you read this work, assuming you have not done so, you will enjoy The Hamilton Affair much more if you first read Alexander Hamilton, A Biography by Ron Chernow.

The plot alternates between episodes in the life of Hamilton and his future wife, Elizabeth Schuyler.  Things begin in Christiansted, St. Croix, where Hamilton was born and lived until his early teens, in January 1768.  Hamilton's parents were not married, his father deserted the family.  His mother struggled to feed Hamilton and his brother.  There were unsavory rumors about her relationships with men.  Alexander, I feel we can call him that, was about thirteen, working as a clerk for a shipping company.  St Croix was dominated by the sugar industry.  The sugar industry was totally dependent on slaves.  To be a sugar industry slave was a horribly cruel life.  From seeing this Alexander develops a life time aborance to slavery.  Hamilton is so smart and so reliable he received sponsorship to go to work in New York.  Cobbs does a wonderful job creating the insular world of St. Croix.

We the move on to Saratoga New York, June 1770 to meet the future Mrs Hamilton, Elizabeth Schuyler at the home of her patrician  and wealthy family, lots of siblings, servants and slaves.  The ambience has a kind of Jane Austen feel.  Elizabeth and her sisters are approaching the age to marry and finding a proper husband is of paramount importance.  A lot of the plot in the first third or do of the book shows us how a penniless, illegitimate foreigner wound up marrying and being totally accepted in one of New York's wealthiest families.

Cobbs takes us through the years of the American Revolution, to his close relationship with Geirge Washington, his friendship with Lafayette, his becoming a general. Seeing his importance as a field commander at Yorktown was very exciting.

We are their at the wedding.  There are explicit sex scenes between the Hamilton's.  Of course this is a product of the imagination of Cobb but we know from correspondence that they were very close.

With alternating chapters as Alexander's work for the government takes him away from home, we get a look at some of the conflicts in the New Republic.  The Hamilton's have lots of children, miscarriages were common as were early deaths.  The Hamiltons are presented as a close couple.  Then Alexander commits a totally out of character blunder, he has an affair.

The novel flashes  on from the tragic senseless death of Alexander in 1804 to the passing of his wife fifty years later.

"Award-winning historian Elizabeth Cobbs brings fresh, unexpected perspectives to our understanding of the past and present. Building upon worldwide research and extraordinary life experiences, Elizabeth writes best selling  fiction and non-fiction that is both scholarly and witty. Her path-breaking books and articles reveal a world that is as intriguing and surprising as it is real.

Elizabeth earned her Ph.D. in American history at Stanford University. She now holds the Melbern Glasscock Chair at Texas A&M University and a Senior Fellow at Stanford University's Hoover Institution. Her books have won four literary prizes, two for American history and two for fiction. Elizabeth has been a Fulbright scholar in Ireland and a Fellow at the Woodrow Wilson International Center for Scholars in Washington, D.C. She has served on the Historical Advisory Committee of the U.S. State Department and on the jury for the Pulitzer Prize in History.". From Elizabethcobbs.com

I learned about the Hamiltons from the book, I, Eliza Hamilton. This book sounds like it would add to my study of them. Very nice review!

I read something on this couple but this book seems more comprehensive. Thanks for the review.

Sounds lika an interesting couple. Will take your advice and read the biography first. It is always interesting to compare historical nonfiction with historical fiction. Thank you for another interesting historical review.