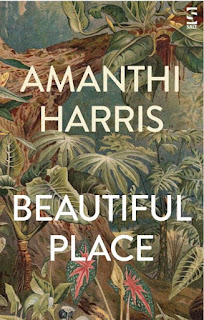 Amanthi Harris on The Reading Life

The plot line centers on a young Sri Lanka woman, Padma.  After an unsuccessful try at university she now lives and manages a luxurious villa, hosting a stream of foreign guests. The property is owned by an Austrian expat, a very successful architect, living in Sri Lanka.   He adapted her when she was quite young from her abusive but lurking in the background still father, Sonny.  Going to Sri Lanka is not a casual holiday for Europeans or Americans.  Often villa guests see themselves on a kind of spiritual guest, hoping to achieve a spiritual ephifany from the temples.  Of course European visitors are intrigued by the thought of a sexual encounter with for them "an exotic woman from the East".   The extreme wealth disparity of the country and the under valuing of female children has created many venues for prostitutes. This should be seen as but another pernicious legacy of colonialism.

Setting the novel in a luxury guest villa means the clientele are affluent.  As a structural device it enables Harris to bring new characters on stage for the single Padma to encounter. Seeing her and the guests size each other up was great fun.

Harris depicts the lush tropical beauty of Sri Lanka, for sure I would love to sample the curries she describes and sit on the beach reading something like A Journey to the East by Hermann Hesse.

We get to know a good bit about Padma's father Sonny who shows up looking for money.  The nearby village is replete with thugs (a term borrowed from Hindi long ago) drug peddlers, crooked local
politicians, relatives wanting to spy on Padma, some to ask her for money and Aunts wanting her properly married.

Many in the local area are jealous of Padma's easily acquired wealth.  A friend of Gebhardt, a European practitioner of Yogi and the author of a less than flattering book on Sri Lanka (Harris introduces the history and divided politics of the island through quotes from his book- a very nice touch, he adds some drama to the plot.

Padma's family wants to exploit her.  There is more to Gebhardt than meets the eye.  I really liked the slow way Harris develops her characters.  Everyone in Beautiful Place is at least interesting and real.  The atmosphere, pervasive poverty, long periods of ethnic conflicts introduces a sinister underlayer to the beauty Harris so skillfully presents.

Amanthi Harris was born in Sri Lanka and grew up in London. She studied Fine Art at Central St Martins and has degrees in Law and Chemistry from Bristol University. Her novella Lantern Evening won the Gatehouse Press New Fictions Prize 2016 and is published by Gatehouse Press (2017). Her short stories have been published by Serpent’s Tail and broadcast on BBC Radio 4 as Afternoon Readings.

I greatly enjoyed and was very much drawn into Beautiful Place.  I hope to follow the work of Ananthi Harris for many years.