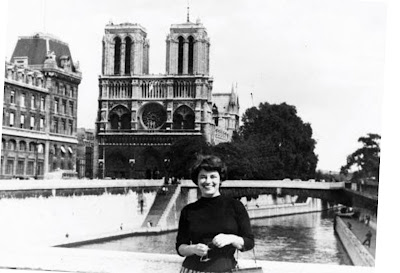 "In Transit" is set in the Helsinki  airport.  Of course one's experience now will vary depending  on the airport, since 1989 some airports like Singapore's are truly winderful and others thirty years past due for renovation.  One can assume the 1989 Helsinki Airport was strictly functional.

In airports people tend to project  onto strangers, to help pass the time.  There are two couples in our story, a newly married French couple, maybe 27 or so and a couple identified as Americans from their accents.  The French man is working on a series of articles for a Paris newspaper.  He understands English but hides this so he can ease drop.  Maybe journalism is just a code  name for superficial observations meant for newspaper readers.

The American couple are continuing what the Frenchman sees as a life time quarell about the nature of their relationship:

"The wild thoughts of the younger man were: They are chained for the rest of this life. Too old to change? Only a brute would leave her now? They are walking toward the door marked AMSTERDAM, and she limps. That is why they cannot separate. She is an invalid. He has been looking after her for years. They are going through the Amsterdam door, whatever their tickets said."

I imagine the Frenchman is wondering if they are his future.  He and his wife have already started what looks life a life time issue over why he left his first wife.

Is it just me or does Gallant often portray Americans in a one-demensional way?

Of course the young Frenchman might be totally wrong about the older couple.

I can see where it might seem as though this couple is something of a stereotype and I'm trying to think of other Americans who seem that way. The French journalist doesn't come off very well in this story either, though, would you say?

He's quick to judge and sure that he knows everything about the couple's story, but it's possible that his judgement says more about him than it does about the couple. Maybe they're talking about something else entirely and it only seems that her injury/weakness is the reason for their staying together...but maybe he doesn't know how to prepare a meal and would starve to death without her? :)

I'm playing with it...I think the North American (U.S. and Canada) characters might seem a little less complex, taken as a whole and compared with her European characters. I'm glad this story was in your collection - it's very short but I rather like it.

Buried In Print. In my collection of her stories, about half of them, I checked and there are over 150 references to Americans. Will look at some.