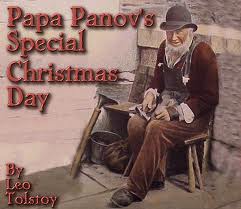 In observation of Christmas, I want to post on  , Leo Tolstoy's retelling of a French Christmas fable, "Papa Panov's Special Christmas".   The origins of this story are a little vague to me.  I have not so far been able to find when it was first published (I am assuming about is in his latter years from the style and subject matter so I guess 1890.  If you know, please leave a comment or e mail me.)   It seems like it was either originally written by a French evangelical Christian, Ruben Saillens (1855 to 1942) or he recording a folk tale.   Tolstoy translated the story from French to Russian and reshaped it considerably.    It reads much more like "Ivan the Fool" than War and Peace.


"Papa Panov's Special Christmas"  is the perfect "meaning of Christmas story".   It is not especially original (it is a retelling of a folk story one way or another) and the point it makes has been made many places but I think no one has made it more movingly and the fact that the world's greatest novelist wrote it simply adds to its power, like it or not.  I will supply a link where you can read it in just a few minutes if you like so I will just give the outlines of "Papa Panov's Special Christmas" .

Papa Panov is a widower.   He has grown children who live far away and he rarely sees them.   He is doing OK with his shoe business, making and repairing them for local people.   He is not miserable or suffering but somehow the spirit went out of his life when he lost his wife.   It is Christmas day.   He steps outside his house into the village street.   He hears happy children laughing and smells Christmas meals being prepared and he feels sad and lonely and wished for the old days when he had a happy family.   Papa Panov goes back inside and sits in his easy chair.   He does not read very much today he takes out the family bible.   He reads the story of Joseph and Mary when they could find no room at the Inn.   He says he wishes he could have been there to give them shelter.    He wonders what gift he could have given the new born Jesus to compete with the gifts of the three wise men.   Then he recalls he still has the best pair of shoes he ever made, baby shoes his daughter had worn.   He says he would give Jesus the shoes.

Even in translation these lines are very moving.

"Suddenly he heard a voice in the room. He sat up startled but could not see who was there. "Papa Panov" said the voice "You wished that I should visit you and that you could give me a gift. Look out for me in the street tomorrow and I will come."

Papa Panov rubbed his eyes, the fire had burned low and bells were ringing to say that Christmas had come. "It was him" said Papa Panov "or perhaps it was a dream, no matter, I will watch for him, but I don't know how I will recognise him."
He did not go to bed that night but made up the fire and sat waiting for the dawn so he would not miss anyone. At last he saw a figure in the distance, he was very excited, perhaps this was Jesus coming to see him. Then he stepped back disappointed, it was the road sweeper, he had better things to do than watch the road sweeper. He looked again and saw the road sweeper rubbing his hands together and stamping his feet. Papa Panov felt sorry, the road sweeper did look cold and imagine having to work on Christmas Day. Papa Panov went to his door and called him. "Come and have a cup of coffee and warm yourself by the fire", the road sweeper gratefully accepted. As he drank s his coffee Papa Panov told the road sweeper how he was waiting for Jesus to visit, the road sweeper wished him the best of luck, thanked him for the coffee and went on his way."

He goes back to waiting for Jesus to appear.   He begins to think maybe it was just a wishful dream of a lonely old man.   Then he sees two women travelling alone with a babies, looking very poor and distraught.

"He watched carefully as he saw two people approach. Then he saw they were two young ladies, each with a small baby, both babies were crying. Papa Panov remembered when his children had been babies and asked the ladies if he could help them, the mothers explained how they had to travel to see their family, but one baby was hungry and the other had lost her shoes and they still had such a long way to go. Papa Panov invited them in to rest. As he warmed some milk on his stove for the babies he told the mothers about his dream, if it was a dream. Then he had a thought, he tried to ignore it but it kept coming back, so he lifted the special pair of shoes from the box and tried them on the baby, they fitted perfectly. "I hope your dream does come true" said one of the mothers as they left "You deserve it for being so kind"


I will let you read the rest of the story.   The ending is not hard to predict but if you open yourself up I think you might be very moved by this simple story of deep wisdom and compassion.

This story is sentimental and some may say it is almost schmaltzy and that it more a fable than a short story to which I can only say yes there is truth in this.   But it seems a deeply felt very wise story to me.   If you have never any Tolstoy, read this and now you have!

You can read the story HERE.
Mel u