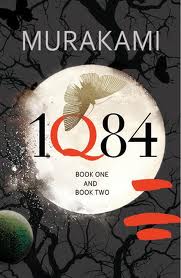 question of the day-are the little people in 1Q84 naked when they appear and if some of them are women how come Murakami does not go on and on describing their breasts?


This is a  follow up to my post stimulated by a tweet of wordsandpeace  in which a link to a print review of the book is given.


This post is kind of a follow up to the numerous comments on
my post in which I did voice my disappointment in 1Q84.   Some said I was totally wrong and others said they also thought the same thing and were glad someone said it.    At first I though well maybe I will not post my opinion at all.   Of course I thought my ego might take a bruising if people felt I was simply not intelligent, well educated  or a simply not a good enough reader to "get" 1Q84.   On the other side, I did not want people to see my post as some sort of extreme elitist put down of a popular book.   I read a number of print reviews of 1Q84 (all posted online).  I got the feeling that paid reviewers almost felt they had to at least half way like the book.   I got the feeling many were holding back on their feelings as they knew what those who pay them want them to say about a much anticipated book that will sell big no matter what.


In my post in December of 2009 on Murakami's Dance, Dance, Dance (which I liked a lot) I said Murakami was a "Bookish Boy's" fantasy world writer.   This term was meant to me a play on "Chic  lit"  ( word I never would use).   Here is what I said in explanation of that as it applies Dance, Dance, Dance  (the question is 1Q84 just a bookish boy's fantasy book and if we ask it to be more than that does it then disappoint badly?)


In talking about The Club Dumas a few days ago I characterized it, in a parody of the term "Chick Lit", as belonging to the category of  "bookish boys lit".   By this I mean a book that plays into the fantasies of bookish teenage boys (and the adult versions of that.)   Examples of quality writers who fall in this category are Pynchon, Hemingway, and Dumas.    To me Dance, Dance, Dance is squarely in this category.   (This is not a pejorative label-really it is not-Gravity's Rainbow is on my list of ten best novels ever and it is for sure in this genre.)   One of the characteristic of the genre is the exploration of hidden or darker sides of things, secret knowledge of worlds unknown to ordinary people.    Male characters in works in this genre have uneasy relationships with women.   There is a preoccupation, this is the books expression, with high class hookers.   The narrator of this book reads Jack London and listens all the time to American pop music.   Your bookish boy reads Call of The Wild and The Count of Monte Cristo.   The narrator ofDance, Dance, Dance best friend charges high class prostitutes to his expense account.

The action picks up.   A number people are killed including several of the prostitutes.   We meet some hard  boiled detectives, your standard seen it all homicide detectives who know enough not to question the owners of expensive call girl rings too much given the level of protection they have paid for.    We get to go along for some fancy meals, paid for by the movie star friend with a lot of  issues in his life, of course.   We get to know some call girls,  a one armed American Vietnam veteran, the 13 year old girl's mother
and a very respectable and nice girl who works at the fancy hotel.   She, of course, is quite beautiful and ends up in love with and in bed with the narrator.
There are lots of clever plot lines and surprises.   The role of the Sheep Man is meant to baffle us, I think.   There are Science Fiction aspects to the book if the role of the Sheep Man is not seen as a dream or hallucinatory episode

Dance, Dance, Dance was, to me, a fun read.   It is in the bookish boy genre and one should know that before reading it.    In my classification, a book can be a work of very high quality and be a bookish boy's novel.   Murakami has written a lot of novels.   People who have read them all pretty much put Dance Dance Dance in the middle rank of his books.   Most goodreads.com readers give it four or five stars and every one says it is not his best work.   I guess I would give it four at least.    I look forward to reading his most highly regarded works.


I know long term readers of my blog were to some extent shocked (though I hope not offended) by my post on 1Q84.   Maybe it was caused because my hopes were so high for the book (I do have the author's pic in my header collage!).


Another question-is Murakami obsessed with breasts?    There are also references to sexual thoughts and conversations with a 13 year old girl by an adult man in Dance, Dance, Dance.


Somethings are subject to cultural relativism.   I checked and the age of consent for sex is 13 in Japan.  In the Philippines it is 18 as it is in most of the USA and UK.   The Los Angeles Review of Books reviewer said Marukami's obsession with breasts seems a bit "pervy".     Does it seem that way to you?


"There are also, as some readers have noted, a lot of descriptions of breasts in the book. A lot. There may or may not be any relevance or resonance to be found in these (perhaps the asymmetry of Aomame’s breasts is meant to suggest the two moons in the sky, one smaller than the other?). Nevertheless, one passing reference likely would have sufficed, and somewhere in the fourth or fifth or sixth such passage, there is the distinct whiff of perviness. Pervy because of the repetition, but also because, while these descriptions are offered from the POV of a female character (usually Aomame), commenting on either her own body or someone else’s, they don’t sound like a woman speaking. Rather, they sound like a man (or a teenage boy) describing a woman’s breasts, or more specifically, like a teenage boy’s fantasy of a woman describing another woman’s breasts. In addition, there are sex scenes in the book, ranging from silly to rather disturbing, which mostly had me wondering: Are there really people who talk like this during sex? And the love story between Tengo and Aomame, two people who know almost nothing about each other, can at times feel a bit hollow, excessively idealized, lacking the messiness, the unruliness of actual love."{


Does Murakami ever bring a woman into the story (other than the Dowager) without describing the size and shape of her breasts?


Is the passage in the quote from Yu meant as a joke or is this a desperate  reach for meaning.   The love story between Tengo and Aomame to me is just totally lame.   I can suspend disbelief with the best of them but this asks you to give up any sense of human reality.   Cultural question from me to those who know-is Tengo's having sex with the 17 year old Fuka-Eri acceptable behavior in Japan in the 1980s?   (Oh yes her breasts are described over and over!)


is there a deep symbolic meaning to all the descriptions of breasts or does the author just like them a lot?


Is sex with 17 year old females considered proper behavior for adult men in Japan circa 1985?   Do you accept Tengo's claim that 17 year old Fuka-Eri somehow used him when they had sex?


OK on the little people?-Come on does this really not seem silly-can you not read about them and not imagine them  bursting into song as they Dance, Dance, Dance across the pages.    What do they wear, are they naked and if some are women what are their breasts like?


The figure of the leader and his two body guards.   Is the leader just a child molester with idiots for followers?


Were you totally bored with the NHK collector material by book two?

The Dowager?-Ok is she right out of a million Gothic novels or what?-this could be a translation issue, partially.


I am open to totally contrary opinions here so feel free to post any comments you like on this.


I am open to the idea I missed it but only weakly as of now-not feeling that now but Murakami deserves the benefit of the doubt.   Maybe I will reread in a year or two.

Still not read the book concerned, although have read the aforementioned reviews, so cannot really comment beyond I've always enjoyed your posts and if this is how the book appears to you, then that is what you write, even if I disagree, I'll possibly explain why and get a dialogue going on the subject, but that's all, I do not think your being elitist, just honest, which is what one expects from a review.

I think women might read the book differently than men. I certainly don't remember much about the breasts, though I do remember other things! Good to get the discussions rolling, Mel.

all these could be legitimate points, but I feel they are like trees hiding the forest. I look at it from a broader perspective I guess, with the meaning of: meaning of life, love, memory.
by the way, my twitter handle is @wordsandpeace, looks like the s went for a walk on another world, lol

I am a terrible self proof reader!-thanks so much for sharing your thoughts

Murakami's obsession with sex, and indeed, lady breasts, is getting more and more creepy the older he gets. I don't have a problem with older men describing the female form, but Murakami does it in a way that does seem like he's a teenager who's just discovered just how great boobs are. It's quite off-putting.

I wonder if the little people can have sex?