My Prior Posts on Narayan


Full Episodes of the Malgudi Days TV
shows from the 1980s (some in English, some in Tamil, read the story and you will enjoy the video in any case-a classic series from Indian TV) 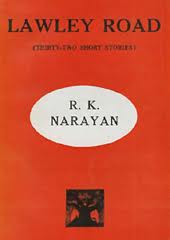 In her introduction to Malgudi Days by R. K. Narayan, Jhumpri Lahari said when she first was sent  the collection of short stories she saw it contained 32  stories.    She reasoned she would read one a day for a nice relaxed pace and finish it in a month.   She says she was so captivated by the wonderful plots, completely real people and beautiful simple prose of the stories that she read it nearly straight through.    I am kind of having the same experience.  I do not feel like reading anything else as long as I have some unread Narayan stories to read.

I have already posted on a number of the stories from anthology that were originally in his 1956 anthology, Lawley Road and Other Stories.   Tonight I want to post briefly on the six remaining stories from this collection included in Malgudi Days.  His stories were written in English for an audience who mostly spoke Tamil as a first language.   Narayan is considered one of the foremost chroniclers of Hindu life in the 20th century through his creation of the wonderful imaginary city of Malgudi.

"The Martyr's Grave" is a story about how quickly the fortunes of life can change as people are swept up by events beyond their control.   The lead character has a street food stall.   His customers are the poor oref Malgudi.   He does pretty well for himself and his family.   He works very hard and has a great spot for his food stall.   One day a political riot breaks out in which a political leader is killed right where the man's food stall is located.   He is forced to relocate his stall 200 meters from his old good spot.   We watch saddened as his life goes very bad.

"The Wife's Holiday" shows well what a great job Narayan does in describing the dynamics in a marriage.   There are a lot of strong women in his stories and the wife in this one for sure is.   When the husband is caught doing something he promised he no longer would when his wife returns from vacation I felt his pain for sure.

"A Shadow" is a very interesting story centered on the son and widow of a movie star.    The man died about six months ago.   He was a pretty big star and the family is prosperous.   His last movie is set to open in Malgudi in a few days.   This story is about what happens when his widow and his son go to see the movie.    It really is a unique story.

"A Willing Slave" is about a seemingly perhaps a bit retarded woman who has worked for many years as helper in an upper middle class family.   She gives nearly all of her pay to her two grown son, described as brutal drunks.   One day her husband shows up after many years in prison and drags her off to be his slave. This is a tale of unremitting sadness.

"Leela's Friend" is another story about a servant.   One day Sidda showed up at the door asking for a job.  He ended up being hired as a houseboy and became the special friend of the young daughter.  One day the girl's gold necklace shows up missing and everyone assumes Sidda stole it.   When they call the police it turns out he has been in trouble before.   The girl Leela pleads for him to stay but he is fired.   There is a very interesting morally confusing twist at the end.   Narayan is really brilliant at ending his stories.

"Mother and Son" is about a widow and her mid-teenage son.   She has found a wife for him.  (Marriages were pretty much all arranged.)   The son does not like the bride as she is too ugly.   They have a big fight.   This is a wonderful story about the love of the mother for her son and his struggles to be a good son but not have his own life ruined, as he sees it.

There are seven more stories in Malgudi days that have not been previously anthologized.    I have already posted on the most famous of them "God and the Cobbler" which is really good.   I read two of the stories today.   As a practical matter I plan to for sure read the remaining five stories very soon but I will not post on any more of them.

One reason I like Narayan's stories so much is there is such a wide variety of people in them, from the wives of movie stars to the poorest people.   All are treated with respect as whole people.

Thanks for the informative article, it was a good read and I hope its ok that I share this with some facebook friends. Thanks.