The Value of the Rain by Brandon Shire


“Promoting special rights for gays in foreign countries is not in America’s interests and not worth a dime of taxpayers’ money.”-Rick Perry-Governor of Texas


"We need to have profound compassion for the people who are dealing with the very real issue of sexual dysfunction in their life, and sexual identity disorders. This is a very real issue. It's not funny, it's sad. Any of you who have members of your family that are in the lifestyle-we have a member of our family that is. This is not funny. It's a very sad life. It's part of Satan, I think, to say this is gay. It's anything but gay."  -Michelle Bachman- a leading American Politician in the Republican Party 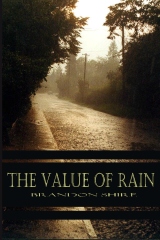 Brandon Shire's  The Value of Rain is a beautiful, stunning, brutally real look at growing up Gay in the America where people admire politicians who make remarks  like those of  Rick Perry and Michelle Bachman.


Richard Nixon was president of the United States of America when the story begins.   To help those not familiar with the atmosphere of America toward the GLBT community at that time consider these remarks on San Francisco made by President Nixon:


""But it's not just the ratty part of town. The upper class in San Francisco is that way. . . . It is the most faggy goddamned thing you could ever imagine with that San Francisco crowd. I can't shake hands with anybody from San Francisco."


The Value of Rain is the story of Charles who was sent to a mental hospital at age fourteen  by his mother to be "cured" of his homosexuality.  He ended up spending the next ten years in a series of "treatment" facilties.  Much of the book is taken up with Charles many years in these barbaric programs. The story begins in 1971 when his mother finds out he is gay.   The Value of the Rain took me on an emotional roller coaster ride over years of Charles life.    There is extensive treatment in the  book of the extreme hatred Charles has for his mother and his life long quest for revenge on her for all of the terrible things that happened to him in the institutions he spent many years in.   He met and loved wonderfully kind and gentle young men in these places.   He was thrown in with young criminal sex offenders almost all of whom had been horribly molested as children.   The doctors and workers were themselves full of loathing for those they are allegedly treating.


The story is narrated in a very interesting fashion with flashes back and forth in the life of Charles.   It is a very nonlinear story which because of this bold treatment by Shire strongly stays with us.   Just as the consciousness of Charles was fragmented by his experiences so our experience of the story requires a reconstructive process for it to be understood.    What seems like vicious story of hatred toward his mother  builds slowly to a profound experience of the cathartic power of love and compassion.


The language in the book goes from lyrical passages you will read over and over for their sheer beauty to sections that are quite jarring in their depictions of the cruelty and hatred in the world of Charles and his family.


This is an intense deeply felt very emotional honest book.   At times Charles hatred for his mother is not easy to take  but for sure it is real.


As I read this amazing book, I was reminded of two literary items from my recent past.    I somehow was brought to mind Katherine Mansfield who was sent by her mother to be treated for her sexual interest in women to "Health Spas" who procedures included being sprayed with high pressure hoses.   I also recalled Anton Chekhov's story of life in a Czarist era mental hospital, "Ward Six".


The author donates 50 percent of the sales of this book to GLBT youth charities.


There is more information on the author's web page.


There is a well done book trailer here.

Reading The Value of Rain was a very intense experience for me.   It is not just a book about growing up gay in America in the 1970s,  anyone who grew up feeling different can directly relate to the story, no matter what your sexual orientation may be.   Many of those of us deeply into the reading life can relate very much to this.   If you do not know what this means, then consider yourself lucky.

The Value of Rain is set in America but the discrimination talked about in the book is world wide.

I salute Shire for his  wonderful first novel and I look forward to reading more  by him in the future.

Thank you so much for this wonderful review, and thank you for sharing it with your readers.

This sounds absolutely fabulous. Thanks so much for this! It's going on my Christmas list of books that I want.

The idea of the story being fragmented to represent the characters conciousness & then to reconstruct it, as though one were the character reconstructing his own life, with the aim of trying to understand & come to terms with it makes this sound like a really interesting work.

Melissa-I hope you the the opportunity to read it soon