"God and the Cobbler" by R. K. Narayan

My Prior Posts on R. K. Narayan 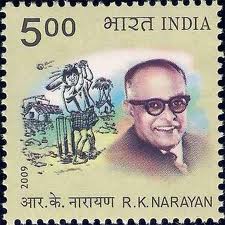 People liked to claim back in the 1970s that they read Playboy magazine for the great prose.   In August, 1976 this might actually have been true when R. K. Narayan (1906 to 2001-India)  had his really wonderful and captivating short story, "God and the Cobbler" published within its glossy pages.

I encountered the story today in his collection of short stories, Malgudi Days.   The collection, with a very interesting introduction by Jhumpa Lahiri, has stories from two of his collections and a number of new stories not previously anthologized.   There are seventeen stories from An Astrologer's Day and Other Stories, I have already posted all of these stories.   There are sixteen other stories in the collection I have not yet read.   I have also read a number of Narayan's thirteen novels and will be reading two more soon, The Guide  and The Sign Painter.   I love the work of Narayan and was happy to see Jhumpa Lahari classified him along with just a few other writers as one of the geniuses of the short story.   (There is some background information in my prior posts on him.)

This story reminded me a lot of Narayan's story "A Horse and Two Goats", one of my personal favorites.   In this story an affluent American tourist and a local goat herder have a conversation in which neither understands what the other is saying but both leave the conversation quite happy.

In 1976 India was awash in the unwashed of the west.   I think it was Jack Kerouac who coined the term "Dharma Bums" to describe western young people traveling through India looking for spiritual enlightenment.

This story is just so great.  (I hope Narayan was well paid to class up Playboy.)   A western man, referred in the story as a "hippy" (the word did not have just negative connotations in 1976 as it does now, I think) comes upon a man besides the road who repairs old shoes for a living.   They can converse a bit in English.  The hippy thinks the cobbler has found enlightenment in his simple work and sees his work on the shoes as a holy exercise of some kind.   The cobbler things the hippy may be a god in disguise sent to test him so he is very cautious in everything he says to him.   The fun and power in this story is the absurd ways that the two men interpret what the conversation is about and how they size up each other.

This is a very good story beautifully told in the simplest of language.   I suspect the beauty of the women depicted in Playboy thirty five years ago have long since faded but that of Narayan's story still shines through.   I wonder if any of the readers of the magazine went on to read more Narayan!

I am glad to be reading and posting on Narayan once again.   Narayan is not just a curousity read, not just an Indian writer.   He is one of the great writers of the 20th century and he is a lot more fun to read than many of the other great writers!

I can hardly believe that I"ve never read Narayan. He's been on my radar for a while, but maybe your review will be the push I need to pick him up. I do so appreciate all of the good short story reviews that you post so that I can have them as a reference.

I definitely would like to read his work. Thank you. Interesting how the word is spelled differently in Europe and the US. hippy and hippie. I think that people now just associate it with drugs and music, but it was so, so much more then. Many of us changed ourselves and even the world a little perhaps. I think we could use a bit of hippie philosophy now in this age of money and makeup. :<)

As usual one can never go wrong with choosing a Narayan. He's always a delight to read!...and I really should read him some more.

As regards the whole hippie philosophy - I was under the impression it was a very self-centred movement(?).

Risa-Yes, I have never read one of his novels or short stories I did not really enjoy and would recommend to anyone