"The Birth of a Man" and "The Icebreaker" by Maxim Gorky


Some Rambling Notes on Why Gorky
is not a very  popular writer. 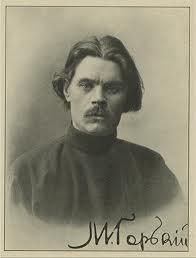 "The Birth of a Man" and "The Icebreaker" are both included in the collection of Gorky's short stories, Through Russia, first published in 1923.   (All of the stories in the collection  are translated by C. J. Hogarth).   I recently "discovered" that the short stories of Gorky (1868 to 1936-Russia) are amazing looks at life in late Czarist Russia among the poorest of the poor.   I have known off Gorky for many years but just read my first work by him a few days ago.   There are as far as I could find very few blog posts on Gorky.   A little research quickly revealed the reason he is now so little read and is held in almost contempt by many.    (There is some background information on Gorky in my prior two posts on him).


'Gorky is seen as the "pet" of Joseph Stalin.   There are lots of pictures of  Gorky and Stalin together and even a famous in its day painting of Gorky reading to an apparently thrilled Stalin.   There are pictures of Gorky posing with the head of the secret police, with generals, and with Lenin.  He was on stamps and coins and statues all over Russia.   Everyone in Russia at one time had to say they loved his work even if they never read it at all.    To be the pet writer of Stalin had to have been near the literary kiss of death among the readers of the western world.   Meaning this pretty literally,  being the favorite writer of Stalin is on a level with being endorsed as a great writer by Hitler.   I do not yet know if Gorky knew of the horrible consequences of Stalin's policies and turned a blind eye to them in exchange for mansions and great fame or if he sincerely believed Stalin was a great man.  A writer can have barbaric or totally naive political views and still be a great writer.   I think Gorky was not taught in English and American schools because of his political views so no one ended up reading him.

I kind of think as one reads more of Gorky, his work was "pure" up until the Bolsheviks took power and then he became increasingly a political writer.   In Gorky's defense, if Stalin decided to make a "pet" of him it would have been very dangerous to refuse his kindness so maybe Gorky was trapped.

OK enough on my no doubt half baked theories!

The five short stories I have so far read by Gorky (I now have found 17 translated stories online) are incredible depictions of life among the sub-peasants in late Czarist Russian (1895 to 1915 or so).    The poor in his stories make the poor in Hugo or Dickens look comfortable!   The realism of his stories did get him locked up by the Czarist secret police and noticed by Lenin.

If every there was a writer who wrote about those who had no one to speak for them, it was Gorky.   He does not write like Tolstoy or Turgenev of the rooted in place peasant but of the very rootless millions that were turned out by their masters with no where to go and no real way to live.   Millions of the people like those in Gorky's stories died as a result of state policy and the total indifference of the Czarist policies.

I will just speak very briefly of the two stories by Gorky I most recently read as I will be reading and posting on more of his work in 2012.

"The Birth of a Man" is set in the Russian country side.   It is narrated in the first person by a tramp, a man without a master.   He encounters a group of  "famine pilgrims" out on the road looking for food and facing death by starvation.   One of the women is pregnant and is about to give birth.   The narrator wants to help her but first he has to be sure she has no man in her life that might cause him trouble.   She has been abandoned.   The scenes of the man bringing the baby into the world are like nothing I have read elsewhere.     He knows pretty much nothing about the procedure and it is the woman's first baby.    It is all very moving without being mawkish like one might find in most of the writers of the era.    You will not find a scene like this in the lady writers of the era.

"The Icebreakers" is set on a frozen river.   There are a number of people in the story, all working poor stuck on or around an icebreaker ship whose job it is to keep the river open for traffic.    (If my memory of history is right-and no I was not there in person-workers on icebreakers and naval ships were among the first to support the Bolsheviks with the revolution began.)   Workers have their conflicts with their boss, a 15 year old son of the owner of a business.   The workers steal nails to trade for drink and when the son threatens to tell his father they just tell him go ahead we will just say we  have been stealing for a long time only you never saw it.   The fun in this story is in the normally behind the scenes conversations of the workers with each other.   We also feel a real sense of danger as they try to walk across the thawing ice.

I am very glad I gave Gorky a try.   I will be reading a lot more of his work,  for sure 13 or so more short stories and his major novel about women in the revolution, Mother.   I will post on the ones I think are most worth reading, maybe all of them.


Question- If Gorky knew Stalin was a mass murderer (20+ million as a minimum) and wrote in defense of his policies for the sake of personal comfort, would that turn you off so much that you would not read his work?    I admit whenever I read the work of German writers from the WWII era,  I look to see if they supported the Nazis.   I would probably not read the work of a Filipino writer who was a great supporter of Ferdinand Marcos (an angel compared to Stalin!)

Both of these stories can be downloaded as Kindles or in other formats (and read online) at eBooks@Adelaide, an excellent easy to use source for free e books.

I haven't read Gorky but I can liked Gogol, especially his very funny novel about dead serfs being counted as alive for economic profit. Dead Souls I can recommend.