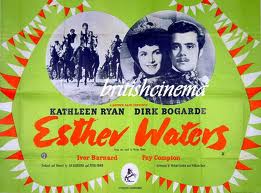 I have recently read a number of short stories by George (1852 to 1933, County Mayo, Ireland-there is some background information on him in my prior posts).    I greatly admire his work.   George Moore is considered the originator of the English realistic novel.  He greatly influenced James Joyce.      He was a deep student of French writers and contemporary art.  Esther Waters seems to be the consensus status (not a universally agreed to matter) best Moore novel.    The George Moore Society says it is his only canon status work but they concede it is not much read.

For its time this set in London novel about an unwed mother left on her own to raise her child was quite shocking.   Esther Waters comes from a poor family, her mother has had 12 children.    Her father is a drunken abusive brute.   The plot is exciting.   For sure you will care about Esther.   She is not your wimpy angelic seduced and abandoned heroine.    This girl has some serious spunk and back bone and when she gets mad she is not afraid to tell of anyone.   Esther leaves her parents house a young age to go into service as a kitchen helper.  She ends up getting impregnated by one of the male servants and when her employer finds out she is pregnant, she fires her but does give her a decent severance.   She goes back to her parents and her father finds out he has some money and he begins to demand she give it to him so he can drink at the pub with his friends.   He abuses her and he may be sexually molesting her younger sister.  Her mother is also pregnant.   While Esther is in the hospital after giving birth, her younger sister comes and tells her there mother died giving birth and all of the family is leaving for Australia but there is no money to take her.  The sister ends up talking her into giving her two pounds to pay her fare to Australia.   She promises to write or even maybe send for her and the baby but she never hears from her family again.

There is so much great detail about the life of Esther.   Some of this book is totally stunning in its expose of how poor unmarried manless women were treated in London in the 1890s.  In one really sad scene a number of women are put out in the street from the birthing ward who can barely walk because other people need their beds.   We come to see that when a woman who has just had a child becomes a wetnurse, a pretty well paying job, it meant her baby would be put out for care and would probably die.   Esther left her job as a wet nurse when her employer, the babies of two prior wet nurses in her employment died already, refuses to let her go see her son when he is sick.   The keeper of the baby tells her that if she gives her five pounds (a month pay) she will take the baby off her hands.   Esther knows this is a death sentence for the baby.

There is a lot in this novel.   Moore was deeply into horse rating and  we learn a lot about racing and betting in this book.   We learn what it is like to own and manage a public house.

Esther is very religious and never loses her faith.   We also see how faith can be used for cruelty.

Esther Waters is not found on any great books list.   There are flaws in the book.   The portrayal of the character of her son is not that strong and I think some people will get bored with all of  the horse racing material.

Historically this is a very important book.   It is often compared to the work of Zola.   Some of the insights into the characters are just totally brilliant.   The level of the prose is very high.   Moore was a conscious artist.   I think most people will be glad they read this novel.  I know I am.   If you do get bored, just keep going as it will get interesting again soon.  I will be for sure reading more Moore soon.