1.  "Bombay's Republic" by Rotimi Babatunde-worthy to be a winner
2.  "Urban Zoning" by Billy Kahora

I will be posting, as will a number of others, on a story a week for the next five weeks.   "Urban Zoning" by Billy Kahora is a better story than any of the 2011 stories. 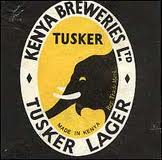 Some short stories should be read in silence with no food or drink to interfere with your experience.   I think "Urban Zoning" should be read only after you have consumed several large Tusker Lagers, Kenya's number one brand of beer.  Thanks to a brilliant Ipad program, Tunein Radio, I can listen to 1000s of radio stations from anywhere in the world.   I think it is best to read this story while listening to Ghetto Radio 88.5 from Nairobi, with external speakers so as to achieve maximum sound.


I have said before I do not really like stories that centering on heavy drinking and the live experiences binge drinkers.   This even kept me from really appreciating a lot of the stories of Raymond  Carver even though I see his technical brilliance.     "Urban Zoning" is about a young man who has given up the pleasures of casual sex for 72 hour drinking sessions.   I realize this is a way of coping with the despair of his environment, in part.  The story starts as Kandle is coming into what he calls "The Zone", a calm state of mind he says he comes into after a minimum of three days straight drinking. Kandle takes us on a sort of interesting night town tour of Nairobi.   We meet some lose women and some of his friends.  It is kind of an interesting tour.  Then we find out Kandle works in a bank.   Before you say say oh how can he do this, just read the headlines about the banks of the world.   Once we are inside the bank and meet the employees there, Kendle has been called up before a committee to justify why he should not be fired for missing a huge amount of work.   I really didn't find myself caring.


This is an OK story, I am guess I am glad I read it but I will be shocked if it wins.  I did not find it real original or creative.


Here is his official biography

Billy Kahora is the managing editor of the Kenyan literary journal Kwani? and the author of The True Story of David Munyakei (2009). His writing has appeared in Granta, Kwani?, Chimurenga and Vanity Fair. His short story, 'Treadmill Love', was highly commended by the 2007 Caine Prize judges. He is working on a novel titled, The Applications and is writing a book on Juba.

I find it interesting that I stumbled across this post. I heard about The Caine Prize about a week ago. I plan to read the 2012 shortlist.

Very interesting post. Tunein Radio sounds fantastic! I would not enjoy stories focused on such heavy drinking, either.

MoniqueReads-thanks for stopping by and I hope you will return

Suko-I am pretty sure Tunein Radio works on smart phones also-I think it is still free-it is great as if I want to listen to Irish music, I can pick from stations in Dublin and all over the world-if I want to here some music from Delhi, it is there-also lots of book related programs are among the preset-including many good ones I never heard off

I was really getting excited about reading this short story, until I read the paragraph at the end, about this being an OK story. Oh! I thought! You reviewed it so well, and because of that, I will look for it, and let you know :)