Bending the Boyne by J.S. Dunn 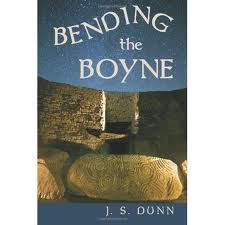 Bending the Boyne by J.S. Dunn  is a first rate historical novel set in Ireland around 2200 BC, before the time of the Celts in a historical period on which we have only a limited amount of hard  knowledge.   The author spent years researching this period of Irish history and has done a first rate job of bringing this period of Irish history to life.  The time is the start of the bronze age and it is set among the people who worshiped at the mounds of the river Boyne area, some of which were already a 1000 years old.   They call themselves "The Star Gazers" and live a simple life of hunting, gathering and fishing with some crops.   Their priests or shamans are very skilled at astrological  observations.     One day one of the women of the Stargazers notices a landing by a group of men heavily armed with long knives.   The people have no words for the horrible crimes the invaders inflict on a innocent local woman.   They are there seeking gold.

There is a lot of history and myth woven in this story and there are plays on modern literature in the work.   It does a good job of letting us  see how people might have lived in the era.

This period of time is part of the collective consciousness of the Irish.   We see it in many short stories and poems which try to evoke ancient times to raise the pride of the modern readers.

Bending the Boyne by J.S. Dunn is very well written, I was involved in the characters and interested in the action filled plot.  For me it was a pleasant way to increase my understanding of Irish history.

I really liked the end notes for the book in which the author talked about different ways ancient Irish history could be viewed and profited from this.

J S DUNN resided in Ireland during the past decade and became interested in the early Bronze Age and marine trade along the Atlantic coasts. The author has traveled extensively throughout coastal Spain, France, and Ireland, to research the megalith sites and the artifacts in BENDING THE BOYNE.
The author  has been published in the fields of law and psychology, and has attended fiction writers’ conferences and workshops in NYC, Arizona, and Florida.

You can learn more about this book at the web page for J S Books.

In the interests of full disclosure, I was provided with a free copy of this work.