The Black Prophet: A Tale of the Irish Famine by William Carleton

The Black Prophet:  A Tale of the Irish Famine by William Carleton (1847) 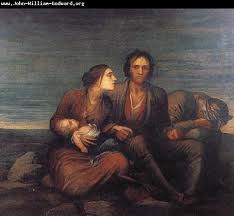 William Carleton (1794 to 1869 Clogher, County Tyrone) was a very  prolific writer.   A great deal can be learned about Irish life in the first half of the 19th century from a study of his works.   (There is some background information on Carleton on my prior posts on him.)

This is my first post for the Classics Club event hosted by Jillian.    I selected for my Classics Club project to read fifty Irish classics over the next five years, an optimistic forecast in more ways than one!

The Black Prophet:  A Tale of the Irish Famine  is about the famine of 1817, not as severe as the famines of the 1840s and 1850s but still very devastating.  The famine years and the subsequent great out flow of people from Ireland is one of  the central  historical events of the country and one can no more understand Irish literature without knowing the basics at least on the famine years than one could understand the post WWII Japanese novel without ever having heard of WWII or the works of writers like Flannery O'Connor and Eudora Welty and never have heard of the American Civil War.

The best thing about The Black Prophet:  A Tale of the Irish Famine is the many small details it tells us about what it was like to live during the famine years.   There is a complicated plot involving a murder and family duplicity but I did not find that real gripping.  ( Most of my  knowledge of the famine years comes from The Great Hunger: Ireland 1845 to 1949 by Cecil Woodham-Smith and Famine:  Galway's Darkest Years by William Henry.)

The famine years brought out the best in many people, lots of mother starved themselves to feed their children and lots of fathers worked themselves to death.   It also brought out the worst in many people, some were driven insane by it and it also caused many venal creatures to come out from under their rocks.   It seems, for example, that there were agents sent out throughout Ireland to look for starving women with beautiful long hair to be bought  for use by English wig companies to make wigs for fine English ladies and gentlemen (there were no synthetic wigs then and wigs were in big demand).   One hair merchant also seems to force his customers, the young and pretty ones at least, to give him a kiss also.   In one really sad scene a hair collector went to visit a dying young woman and when he is alone with her, he cuts off her hair and knowing she will die soon anyway, he sees no need to pay her a fee.   We also learn that many of the people did not die simply of lack of food but by diseases brought on by weakness.   If you read a lot of short stories and novels set in Ireland in the 19th century you will find a lot of references to mentally challenged adults and children whose condition came about due to extreme poor nutrition of the child and the mother.

There are lots of references to people who emigrate, mostly to America, or people who want to leave.

A lot of the story is told  through conversation and those who do not relish country dialect will find this  slow going some of the time.   The expository prose of Carelton is perfect.

There is a lot to be learned from and enjoyed in The Black Prophet:  A Tale of the Irish Famine.   The characters are a bit stock but they are pretty well developed.   I recommend this book to those interested in 19th century Irish history and literature.  I hope to read a lot more Carelton.

Sounds like a fascinating book. I like what you say about the necessity of knowing the story of the famine to appreciate a lot of Irish literature. Thanks for sharing! :)