The Vagrants by Yiyun Li 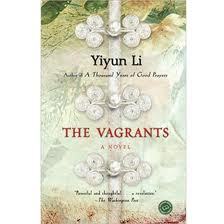 During the duration of  The Irish Corner:  A Celebrations of Irish Short Stories (March 11 to July 1)  I am still reading some works not directly related to the event and will post briefly  on them upon completion.

The Vagrants is set in Communist China in the middle 1970s, just as Beijing begins to experience wide spread protests against Maoist doctrines.   It was a time in which everyone was in danger of being denounced as a proponent of prohibited ideas and suffer terrible punishment.   The novel centers on the lives of very ordinary people trying to survive.   Two of the central figures are an elderly couple whose daughter is schedule for and ends up being publicly executed as a counter revolutionary after many years in prison.   It was very sad   to see that the parents are afraid to even morn for their daughter and they fight over what caused her to go down this path.  In a terrible scene, it appears that just before she was executed, she was operated on to remove salable organs.  It is hard to fathom the mentality of a doctor that would do that and I wonder if this was a common practice and maybe is still some in parts of the world.

The Vagrants is a beautifully written novel that is not just about China in the 1970s, it is about what happens when people have no power over their own lives, can barely survive and can trust no one.  I highly recommend  it.

There are many Chinese
novels that I hope to
read in the future,
I think I'd like to
read The Vagrants
soon, many thanks for
posting on it.

I thought this novel just stunning; it's difficult to read, at times, but so worth it.

Like yourself Mel, I thought this was a great debut. I still vividly recall each of the characters and my emotional response to what happens to them.

I'd also highly recommend Li's two short story collections, which I thought compared to my great favourite Alice Munro. In fact, when Anthony Doerr beat Li to The Story Prize last year with Memory Wall, I bought it because if someone thought it better than Gold Boy, Emerald Girl I had to read it! (I'm yet to do so though).

Sarah, I have not read near enough Alice Munro, I was intrigued by your reference to Anthony Doerr so I downloaded samples of his two collections of short stories and will read the works in them soon-thanks for your visit and comment.