August is a Wicked Month by Edna O'Brien

Edna O'Brien (1930, born County Clare, Ireland) is one of Ireland's leading writers.   Her work was considered daring for its treatment of the lives and sexuality of women as she was a ground breaker for women writers.   She was way ahead of the pack in letting us explore the inner lives of women.   August is a Wicked Month has just been reissued by Open Media Media publishing in a beautiful new edition. 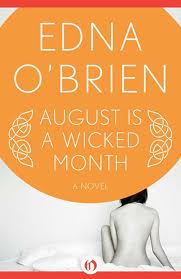 The novel is about a woman seperated from her husband for two years now.  They have a son they shared custody on.    She has decided to go to the French Rivera to revive her joie de vivre and rekindle her sexual impulses.   This impulse is initiated when a man she does not know well shows up at her door one day to complain about his girl friend and she ends up spending the night with the man.   This night is in a way cruel to her as it brings to the surfaces wishes and desires she thought she had put to rest.   She buys herself some new "party girl" clothes and sets off for the French Rivera.  I think in 1965 this had an exotic ring to it, maybe more than it does now.

The woman has several sexual encounters, they range from completely joyless to OK experiences.    The book is surprising it the frankness of its sexual scenes, and was even more so in Ireland in 1965.  The lead character Ellen is being ironic when she says "August is a Wicked Month" as this is at best tepid evil.

O'Brien does a great job of showing us how trapped Ellen is by her culture and the morals drilled into her being by her upbringing.   She cannot, it seems, just let go in a sexual encounter but must create a sense that she has a relationship with the man involved.  It is like she wants to have a series of short marriages rather than a robust debauch.  The prose is a joy to read and we really do get to know Ellen.

This is a very good novel and I hope to expand my reading of her work soon.

This book is published by Open Road Integrated Media.   They have a very interesting, diversified and rapidly expanding selection of works on their very well done web site.

I plan on reading this as well. Excellent, concise review!

Suko, it is for sure worth reading

I'm really surprised the book is open and frank about the protagonist's sex life. I always thought the Irish were very religious and Catholic. I've seen O'Brien's books for years and will be reading some of them eventually. Right now my bedroom floor has a pile of books to be read.

Judaye, you are exactly write and even more so the 47 years ago when this book was written. Thanks so much for your comment and visit