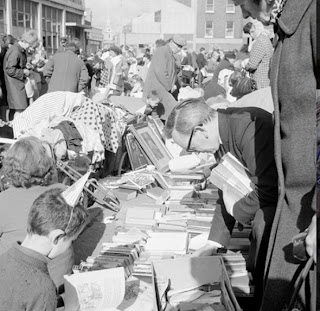 Kevin Barry has published two collections of short stories, There Are Little Kingdoms and Dark Lies the Island as well as a novel City of Bohane.   He recently won the very prestigious 2012 Sunday Times Private Bank Short Story Award for "Beer Trip to Llandudno", a story I greatly enjoyed.   I also read and posted on his "The Fjord of Killary"  which was published in The New Yorker.   I was very happy yesterday to discover that another one of his short stories, "Atlantic City" was available online.   I confess when I first saw the title I wondered if it was set in New Jersey!

"Atlantic City" is really about a little kingdom, one set in amusement parlor in a small town in Ireland.   It is the hang out for teenagers, mostly boys but a few girls stop in from time to time.  There is a pool table, a jukebox,  but the center piece is a pinball machine.  Every time someone breaks the high score for the day it sounds out "Atlantic City.   Feel the Force!".   The king of this arcade is James, 19 and described as as big as a van.   He is the champion pool player and is a very dominating monarch.

The very real fun of this wonderful story is seeing how the boys interact with each other.   Barry brings this arcade completely to life for us.   Things get exciting when some teenage girls stop by, nobody quite knows what they are supposed to do but James thinks he does.   There are reports of some vandalism in the area and a local policeman stops by to rattle some cages and the owner of the place threatens to close it down.

Kevin Barry is the author of two short story collections, There Are Little Kingdoms (2007), for which he was awarded the Rooney Prize for Irish Literature, and Dark Lies (2012). His story ‘Beer Trip to Llandudno’, from Dark Lies, won the 2012 Sunday Times EFG Private Bank Short Story Award. City of Bonhane, his first novel, was published in 2011.  He is also a screenwriter, and his plays have been produced in the US and Ireland. He lives in County Sligo.

You can read the story here

I liked how Barry handled the ending of the story.   He tells us what happens to some of the boys in the arcade and it was very moving.

Heya i'm for the first time here. I came across this board and I find It really useful & it helped me out much. I hope to give something back and help others like you helped me.
Also visit my webpage ... chicago pool table movers