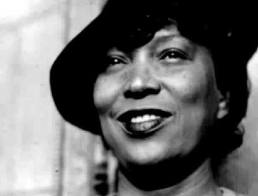 My Prior Posts on Zora Hurston

Banned Books Weeks, sponsored by the American Library Association, is in its 30th year.  I am observing the week in two ways.   I am hosting a series of five guests posts, courtesy of Open Road Media, one of America's most interesting and innovative publishers, in which distinguished authors talk about banned books.   I am also posting this week on short stories by authors whose work has been banned and trying to explain why and how this came about.

Zora Hurston (1891 to 1960-born in Alabama, in the USA) was a folklorist focusing on African American people in rural Florida during the 1930s.   She was also a playwright,  the author of lots of wonderful short stories and is probably most famous now for her 1937 novel Their Eyes Were Watching God.   Her novel is now considered essential reading in feminists and African American studies but this recognition came only after her death, in total poverty.  (There is additional background information on Hurston in my prior post on her work.)

Hurston's work was banned because of social pressures from two seemingly incompatible directions.   She was trained as a field anthropologist by Frederick Boas and Ruth Benedict.   She was the only non white student at Barnard College and studied along side of Margaret Mead.   Her field work was done in rural Florida, where she grew up,  among descendants of  slaves.  Hurston tried very hard to duplicate the speech patterns and write accurately about the people she observed.   To those in charge of the publishing industry and schools (basically all whites) the people in her stories seemed to speak in a completely uneducated grossly ignorant fashion so they would not publish her work or sanction its teaching.    It was taken up by the literary movement known as The Harlem Renaissance and  affluent white  very educated people who cherished her work as folk tales.   Later she was attacked from another direction.   People turned on her and said she had turned the people in her stories to fools, with the women as near whores and the men as drunken abusers who all spoke in a fashion straight out of an old racist radio and TV show, Amos and Andy.  Hurston was considered to have sold out the people she grew up with for approval and financial support by wealthy whites who supported her work.   So was for many years scorned by black studies programs and by white Racists.   She ended up dying alone, in poverty in a nursing home after years of alcoholism.

Since her death her stories and folk studies have come to be seen as the best real life glimpse of what it was like to be black in rural Florida in the 1930s.

"The Gilded Six-Bits" is a great story, not such a historical document (If that was all it was I would not post on it).   It about the married life of an African American couple.   They seem to have a wonderful relationship.  The man works hard at his night job at a lumber mill and the wife works hard at home and in her vegetable garden.   They seem to really enjoy their relationship.   Some may still find the conversations of the characters offensive and think they are patronizing to the people of the milieu.   What I loved about this story so much is how it makes  person, no matter who they are, think about what would happen to their marriage if the husband were to walk in on his wife in bed with a man he hated.

This is not Madame Bovary or Anna Karenina but it has a great deal to tell us about how adultery happens and the consequences of this for a happy marriage, something the great masterworks do not give us.   It is only a few pages long and I will leave the rest of the story untold (I will provide a link where you can read it at the end of the page.)   It made me wonder what I would do if I were the man in this story.   There is real wisdom in this story.  I think anyone who reads this story will want to read more of Hurston's work.   I know I do.

The story would offend a lot of people today with its use of now totally unacceptable words, by African Americans on each other and probably might not be teachable in a general classroom in the USA.    She went from being banned by white racists, to being banned in black studies programs as pandering to the prejudices of racists to an icon of American literature and our best source into a lost culture.   She was also banned for the sexual content of her work.  One of her most famous stories, "Spunk" plays on the slang meaning of the time for this word, which is "semen".   Black men do often seem sexually rapacious in her stories and women may be seen by some as portrayed as of low sexual  morals to the conservatives of the times.

My suggestion is to read "The Gilded Six-Bits" for yourself and make up your own mind on why it was banned or if it deserves to be read.   My guess it will leave you wanting to read her other 49 short stories.

You can read this story, and others by Hurston, here.