"A Country Doctor" by Franz Kafka

Guest Post from Five Authors on their favorite banned books.

This week I will be observing Banned Books week in two ways.  One by posting a series of five guests posts authored by well known writers on their favorite banned books and secondly by posting on some short stories by authors whose work has been banned.

Franz Kafka's work was banned for many years in his birth country Czechoslovakia as decadent and depraved.   In 1989 he was finally given the honor in his home country he deserved.    In 2007 his work was banned from schools in Poland.  During the reign of the Nazis in Germany, his work was banned as "appearing to be too Jewish".  He was also banned during much of the period of the Soviet Union in Russia. 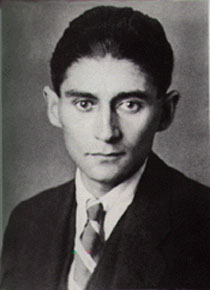 Franz Kafka (1883 to 1924-Prague) is one of the dominating figures of world literature.   Even writers who have never read any of his works  are very influenced by his surreal plots of people  trapped by absurdities.

How many times have you read an article in which a writer was described as "Kafkaesque"?    My suggestion is that instead of reading all these imitators we read more of the real thing.  Lots of Kafka's many short  stories, some in brand new translations, can be read for free online (I will provide a link at the end of the post).   I have previously posted on two of  his most famous short work of fiction.  One is  sure one of the most influential short stories of all times, "The Metamorphoses"  and also his amazing story, a bit longer, "The Penal Colony".   Both of these works are very great works of art.   I know a lot of people, as I once did, dismiss short stories as a "lightweight" literary form but I do not think anyone who has read these two Kafka stories would say that.   They are not hard force yourself to read works because they are assigned in a class stories (if they were I would say so) but they are part of the canon of the short story and they are actually quite thrilling to experience.

"A Country Doctor" is a strange (no surprise with that) story about the attempt of a country doctor to save  the life of a sick young boy.  In the middle of the night he needs to go on a ten mile trip to the boy but his horse died the previous day.  Just as he despairs over what to do, a mysterious horse groom appears and offers him two horses to pull his carriage.   The groom looks at the doctor's young housekeeper Rosa with clear intentions of molesting her once the doctor leaves, he forces a kiss on her as soon as he sees her.   The doctor suggests the groom go with him but he wants to stay behind, telling the doctor he will slow down his journey.   The doctor knows he can possibly save the boy but the price may be letting Rosa get raped.   He arrives at the house of the sick boy at an amazing rate of speed.

Once there he sees the boy is terribly sick looking but he can find no cause until he is shown a horrible wound in the boy's side.   He cannot understand what the family is saying to him, as if he were in another world where the language is not German but all else is the same.   The family,the reason is not clear, force the doctor to undress and get in bed with the boy.   The doctor leaves and now the horses  are too exhausted to carry him so he has to walk home through through the snow covered countryside.

You can read this and lots more Kafka online here

I've read a few by Kafka and loved them. The Hunger Artist is his, yes? I have not read The Country Doctor, though.

I will say that if you limited yourself to reading only banned books, you'd have a darn good reading list.

C. B.James-Yes "The Hunger Artist" is one of his stories-you are very right in your observation about banned books-thanks as always for your comments

I keep meaning to return to Kafka - it's years since I read any of his work. Thanks for the links which mya inpsire me to do so.

as above I've not read him in a while but have thoroughly enjoyed what I've read & have Dearest Father sat on my book shelves, waiting on my attention.

He's a wonderfully inventive writer. I must return to him again.

Your description of Kafka's surreal plots of people trapped by absurdities is excellent. The Metamorphosis is an incredible short story that's not to be missed.