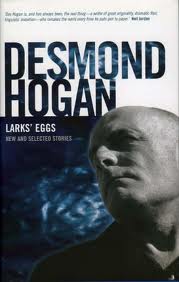 "We are of an ancient stock", my father used to say..We were here before St Patrick and we will be here when he's forgotten...Our secrets are the secrets of the universe...We are the sort that Joseph was when he fled with Mary".

When I first began to read Hogan, I sensed an understanding of why the Irish Travellers was central to grasping one his deeper themes.   Since first saying that I have read older Irish literary works such as John Synge's The Tinker's Wedding and Seamus O'Kelly's wonderful short story "The Can With the Diamond Notch" depicting the way mainstream people saw Travellers (called Tinkers in those days) as loud and boisterous and out of control.   If you think about it a bit, this is how the English of the time saw the Irish,  the Travellers were the stage Irishman of the Irish.   Part of my ability to see this comes from my reading in the work of Declan Kiberd and Edward Said.   I recently acquired an ebook of the complete poems and poetry of William Butler Yeats (some 2400 pages) and I scanned it for the term "Tinker".   It shows up 41 times.   I looked at some of the poems in which the word occurs and Tinkers are depicted as somehow symbols of freedom but also always as outsiders who behaviour is beyond the pale of good society.   Yeats and Synge romanticised the Travellers and pushed them into the trap the Irish were pushed into by the English.   There is no conception of the ancient lineage of the Travellers in much of the literature of the Irish literary renewal.   I think it is instructive to look at the treatment of Travellers in "Barnacles", centering on the life of an elderly Travellers woman now dying in a hospital to see that Hogan is trying to see and tell the truth about Travellers, not romanticise them.   There is the question I proposed earlier and still wonder about.   Why does the first person narrator in many of these stories, an autodidact with all sorts of obscure knowledge, choose to spend his time among overall very uneducated people who do not really accept him.

There are thirty four stories in Lark's Eggs and Other Stories, as of today, I have posted on twenty four of them.   The more I read Hogan's stories, the more I see in his work. .  I think the short stories of Desmond Hogan are world class literary treasures.

I intend to post all of the remaining stories, some one at a time and some in groups.   I am treating Hogan's stories as found objects, a way of looking at literature from the long ago.   Even though the stories in Lark's Eggs and Other Stories were not all published originally at the same time I will also on occasion treat the collection as one object, as that is how it is now being presented to the world.  (Treating some of the stories one at a time and some in groups is not a value judgement.)  My posts on Hogan are primarily for the purpose now of helping me clarify my understanding of them.   If someone is motivated to read Hogan or appreciates my posts in someway, that is great. As far as I know none of Hogan's work can be read online (He has no web page) but you can purchase an E-Book at a very fair price.

"Barnacles" is the first story I have read by Hogan that relates to the conflicts in Northern Ireland.   The story begins by telling us something of the life history of the Travelling woman and the large number of children she had.   Some come to see her and some are scattered through the world.  One of her children was taken by Irish tourists when he was two years old, supposedly just for the summer.  She never saw him again.    When words gets out that she is dying her extended family comes to see her.   The life history of Eileen is just fascinating and beautifully relayed to us.   We learn more about Tinker culture than we have in the prior stories I have read.  In 1916 or so some viewed the Tinkers and the IRA as in league, in truth the tinkers cared for neither group but there role as scavengers of bomb sites gives us a lot to think about.   It was also suggested they loved the chaos just for the pure joy of it.   We learn of the old woman's memories of the famines, or maybe borrowed memories from her family.

I love this story.  I really liked the ending.    There is so much in this story I know I am leaving out but I will come back to different approaches to his work as I proceed in my project.


Larks' Eggs and Other Stories by Desmond Hogan can be purchased from Lilliput Press, a premier source for quality books from and about Ireland.

Mel,
I love this story!
You've touched on something that appears frequently in Hogan's work - the merging of past and present and how our pasts always appear in some form (mythological or real)in the present. This, of course, is also parallel to the history of Ireland - the repetition, the negation, the masks.

Mel
I really like this story - the way Hogan portrays women and the silent strength.
You've touched on something that recurrs frequently in Hogan's work - that is how personal and social history (and that of landscape and country) often slips into our present to remind us of where we have come from, how we have come to be where we are and, of course, to remind the reader that the past is always very much present.
Shauna