"Go Talk to a Goy" by A. Ansky. 1912- The Reading Life Yale Yiddish Library Project 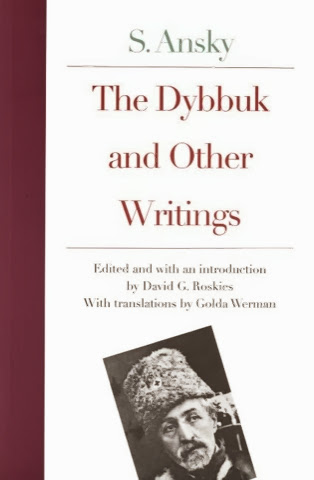 Shloyme Zanvl Rappoport, known by his pseudonym S. Ansky, was a Russian Jewish author, playwright, researcher of Jewish folklore, polemicist, and cultural and political activist.
In The Dybbuk, a drama of mystical passion and demonic possession, S. Ansky (1863–1920) brings together the saga of his own youthful rebellion against religious authority, his abiding faith in the power of the simple folk, his utopian struggle for equality, and his newfound commitment to the Jewish people. Ansky had just returned from an epoch-making ethnographic expedition through the Yiddish heartland of Eastern Europe, and what he found in the towns and townlets of the Ukraine was a religious civilization that mediated the living and the dead, the strong and the weak, the natural and the supernatural. In his introduction to this volume, David G. Roskies reveals that Ansky’s return to Mother Russia was accompanied by a profound renegotiation with his hasidic heritage, the Yiddish language, and the Jewish historical imagination. The book also includes little-known works of autobiographical and fantastical prose fiction, as well as an excerpt from The Destruction of Galacia, Ansky’s four-volume chronicle of the Eastern Front in the First World War.  -from Yale University
"What is Yiddish literature? where was it written?  Where did the writers live. As I advance into Yiddish literature, something I know little about and I know many of my readers are not yet acquainted with this reading area, I will try to delve a bit into the culture.   All the writers were Ashkenazi Jews, it seems all men, mostly living in Eastern Europe, Russia, and Germany and the Near East or in America as immigrants. Einstein and Kafka spoke Yiddish.  Their history is complex and not fully agreed on by Scholars. The subject is very political to some. The migration patterns of people of of Jewish faith began in ancient times but DNA testing shows largely European DNA in modern Yiddish speakers. Here is what seems to be emerging as a consensus opinion. 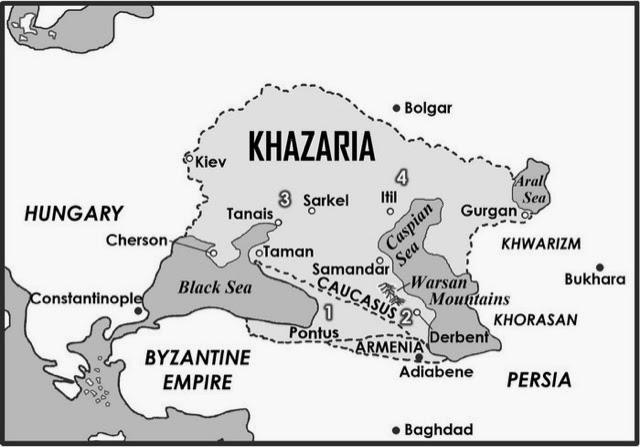 The Ashkenazi Jews from Khazar empire

http://dc.indymedia.org/newswire/display/91551/index.php
"The Khazars were derived from a mixture of Finns, Turks and Mongols. As early as the third century AD, they were identifiable in constant warfare in the areas of Persia and Armenia. Later, in the 5th century, the Khazars were among the devastating hordes of Attila, the Hun. Around 550 AD, the nomadic Khazars began settling themselves in the area around the northern Caucasus between the Black and Caspian Seas. The Khazar capital of Itil was established at the mouth of the Volga River, where it emptied into the Caspian, in order to control the river traffic. The Khazars then extracted a toll of 10% on any and all cargo which passed Itil on the River. Ah yes, taxways all the way to the 5th century. Anyone who refused to pay the tax (toll) was immediately attacked and slaughtered - not greatly different from today.

"Then a stunning event took place in the mid-700's AD. The Khazars had been under continual pressure from their Byzantine and Moslem neighbors to adopt either Christianity or Islam; but the Khazar ruler, called the Khakan, had heard of a third religion called Judaism. Apparently for political reasons of independence, the Khakan announced that the Khazars were adopting Judaism as their authorized religion.

"Overnight an entirely new group of people, the warlike Khazars, suddenly proclaimed themselves to be Jews - adoptive Jews - and formed their tribe straight away. The Khazar Kingdom began to be described as the "Kingdom of the Jews" by historians of the day. Succeeding Khazar rulers took Jewish names, and during the late ninth century the Khazar Kingdom became a haven for Jews from other lands. "

The big controversy historically seems to related to whether or not Eastern European Jews have ancestral roots in the holy land from migrations long ago or are they descended from converts.

"Go Tell it to a Goy" is set among supporters of communism in the days just before the Russian Revolution.  The narrator identifies himself as Jewish.  He talks about how many Jews converted to Christianity to escape prosecution which included death.  People converted in name only.  You had to learn the Russian Orthodox Catechism and go through a ceremony with a priest.  The narrator understands people did what they had to but he does not hold the practice in much respect.  He tells a great story of a man who made a living by acting as a stand in at converting ceremonies, pretending overtime to be hundreds of other men.  It was just a way to make a living.  He gets involved with a Christian woman, a goy, who is a fervent supporter of the communists.  They need to travel together to another city and this required a passport.  The Jewish narrator is given a passport saying he is Christian, the Christian woman's passport labels her a Jew.  This causes her all sorts of problems so the man suggests she convert to Christianity.  She says she already is a Christian and won't convert.  The reality behind the story is that a cataclysm is coming for the Jews of Russia and all of the society.  The story really is a lot of fun to read and the character of the narrator is brilliantly realized and I learned some history from it.  I will be reading much more of the author's work including, The Dybbuk.

Please share your knowledge of Yiddish Literature with us.

Yale University Press, in partnership with Open Road Media, has just announced an important new project.   Here is the release on the project:

·      The Letters of Menakhem-Mendl and Sheyne-Sheyndl and Motl, the Cantor's Son by Sholem Aleichem

·      The End of Everything by David Bergelson

·      The Glatstein Chronicles by Jacob Glatstein

·      The World According to Itzik: Selected Poetry and Prose by Itzik Manger

·      Everyday Jews: Scenes from a Vanished Life by Yehoshue Perle

The Cross and other Jewish Stories by Lamad Shapiro