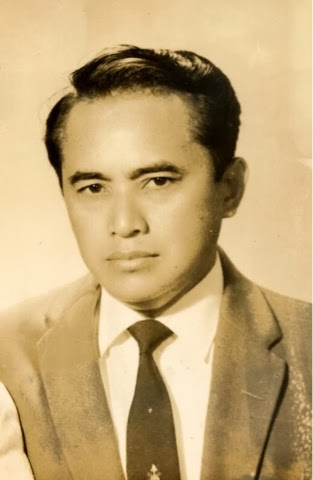 Author bio (from The Phil Star

He (1913 to 1996)and his wife Edith are credited with establishing a tradition in excellence in creative writing and the teaching of literary craft at Silliman University. He served as English Department chair, graduate school dean, vice-president for academic affairs, and writer-in-residence.

As a Guggenheim writing fellow in 1955 he  submitted a collection of short stories, “A Stream at Dalton Pass and Other Stories,”  for his Ph.D. in English at the University of Denver. This collection won a prize at the same time that his second novel, “More Than Conquerors” won the first prize for the novel.

He, along with his wife Edith,   studied with Paul Engle in the Iowa Writers’ Workshop. Graduating in 1962,  their experience there inspired them to found the Silliman National Writers Workshop, the first in Asia, which continues to this day.

He was also a Rockefeller fellow. He won the Cultural Center of the Philippines (CCP) Prize, the Palanca Awards,  the UP Golden Anniversary Literary Contest prize,  and the National Book Award.

Of the  1800 plus posts on my blog, the most viewed posts are those I have done on older short stories by writers from the Philippines.   These stories, aside from the very high intrinsic pleasure of reading them will soon be the only way non-scholars in Filipino history will have access to the traditions of the culture.  If you read through my posts on Filipino literature and history, you will get, I think, an over view of the countries literary history.  The stories are a great treasure trove for those into Asian post colonial studies and Filipino folk lore.  Above all that, the stories I have posted on are all a lot of fun to read.

The Witch" by Edilberto K Tiempo is very wonderfully totally fun to read short story that helps us understand the role of witches in Filipino culture.  These folk ways may be all that we can still access concerning the beliefs and traditions of the very diverse people of the Philippines prior to the near total destruction of indigenous culture by Spanish, Muslim, Japanese and American colonial rule.  Those into Irish folklore will notice similarities concerning animals announcing death through spirit possession.

Witches in stories world wide are almost always old, ugly, isolated women feared by their neighbors. I wish to quote enough of the story to give you a feel for the simple but elegant prose style of Tiempo.

"When I was twelve years old, I used to go to Libas, about nine kilometers from the town, to visit my favorite uncle, Tio Sabelo, the head teacher of the barrio school there. I like going to Libas because of the many things to eat at my uncle’s house: cane sugar syrup, candied meat of young coconut, corn and rice cakes, ripe jackfruit, guavas from trees growing wild on a hill not far from Tio Sabelo’s
house. It was through these visits that I heard many strange stories about Minggay Awok. Awok is the word for witch in southern Leyte. Minggay was known as a witch even beyond Libas, in five outlying sitios, and considering that not uncommonly a man’s nearest neighbor was two or three hills away, her notoriety was wide. Minggay lived in a small, low hut as the back of the creek separating the barrios of Libas and Sinit-an. It squatted like a soaked hen on a steep incline and below it, six or seven meters away, two trails forked, one going to Libas and the other to Mahangin, a mountain sitio. The hut leaned dangerously to the side where the creek water ate away large chunks of earth during the rainy season. It had two small openings, a small door through which Minggay probably had to stoop to pass, and a window about two feet square facing the creek. The window was screened by a frayed jute sacking which fluttered eerily even in the daytime."
The ending of the story presents us with an intriguing mystery.  It makes us wonder if it is not our own fear of those who are different that creates witches.
You can easily find this story online.