Anna Kavan was born in France to British parents. The only child of cold, wealthy parents, she grew up emotionally rootless, leading to lifelong depression and bouts of mental illness. She grew up in Europe and the United States, and lived in Burma for a time after her first marriage.[1] She married and divorced twice. Her one son, Bryan, died in WWIi. Her daughter, Margaret, born during Kavan's marriage to Stuart Edmonds, died soon after childbirth. The couple adopted a daughter whom they named Susanna.

Her initial six works were published under the name of Helen Ferguson, her first married name. She eventually named herself after a character in her own novel Let Me Alone. Asylum Piece and all subsequent works were authored as Anna Kavan. Kavan was addicted to heroin for most of her adult life, a dependency which was generally undetected by her associates, and for which she made no apologies. She is popularly supposed to have died of a heroin overdose. In fact she died of heart failure, though she had attempted suicide several times during her life.

The first six of her novels gave little indication of the experimental and disturbing nature of her later work. Asylum Piece, a collection of short stories which explored the inner mindscape of the psychological explorer, heralded the new style and content of Kavan's writing. They were published after she was institutionalised for a heroin-related breakdown and suicide attempt. After her release, Kavan changed her name legally and set about a new career as an avant-garde writer..

An inveterate traveller, Kavan spent twenty-two months of World war II in New Zealand, and it was that country's proximity to the inhospitable frozen landscape of Antarctica that inspired the writing of Ice. This post-apocalyptic novel brought critical acclaim, earning Kavan the Brian Aldiss Science Fiction Book of the Year award in 1967, the year before Kavan's death. She died at her home in Kensington on December 5, 1968.  (From Wikepedia)

"The Visit" is my first exposure to the work of Anne Haven.  It is a very strange, hypnotic multi-dimensional work I loved reading.   I know two things for sure about her,that "The Visit" is a fascinating multi-dimensional work centering on the sexual fantasies of an English woman living by herself on a tropical sea shore.  I also know almost no one will read a post on her.  If you have read her work, then the image below will bring back this story.  I have access to one more of her stories and will read that soon. 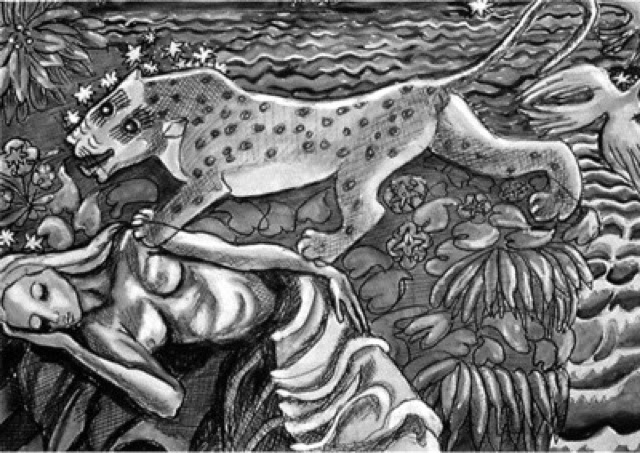 I loved this story the first time I read it. I can feel the breath of the leopard in the hot darkness. I especially enjoy the development in her mind of a relationship or connection with the exotic and noble creature.