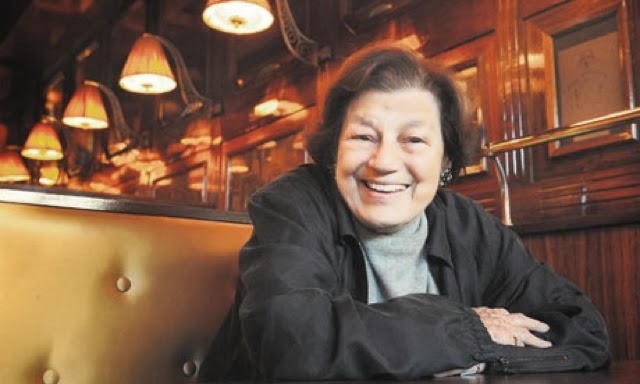 Mavis Gallant was born in Montreal and worked as a journalist at the Montreal Standard before moving to Europe to devote herself to writing fiction. After traveling extensively she settled in Paris, where she still resides. She is the recipient of the 2002 Rea Award for the Short Story and the 2004 PEN/Nabokov Award for lifetime achievement. New York Review Books Classics has published two previous collections of Gallant’s stories, Paris Stories, selected and introduced by Michael Ondaatje (2002), and Varieties of Exile, selected and introduced by Russell Banks (2003). (From The New York Review of Books)
I feel a great sense of frustration almost despair when I think of all the wonderful writers I will die never having read or even worse never having heard about.  Ai least now Mavis Gallant will not be among them.  "Rue de Lille", from her 1985 collection of twelve set in Paris short stories, Overhead in a Balloon (first published in The New Yorker as were many of her stories, throws us right into the lives of a married couple, the wife sixty, the husband a bit older.  The husband finds his wife dead on the floor of their apartment, it looks like she died trying to retrieve a five franc coin that had rolled under a cabinet.   She was a translator of popular American novels into French, he was a Stendhal scholar and the host of a literary radio program in Paris.  Gallant takes us deeply into their marriage in just a few pages.   We sense the great void that will come into the life of the husband.  I think the contrast between the wife's work as a translator of American pop fiction and the husband's on classic French literature is brilliant.    For sure I will read more of Ms. Gallant's work soon.